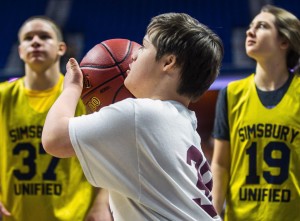 As part of the celebration of surpassing the 1 million participant milestone, Special Olympics and CIAC is encouraging all who have been impacted by Unified Sports to share their story and thank those who have helped make the program possible. Fans and supporters are encouraged to use the hashtag #PlayUnified and share their stories from across the world. To read some of the inspiring stories from athletes and partners playing unified, visit here. Connecticut’s Unified Sports program is one of the strongest in the nation and is viewed as a model for other states.

Officially launched in 1989, Special Olympics Unified Sports has gained momentum over the last 27 years due in large part to multiple partners and supporters who have facilitated the growth of the program, such as ESPN, the Department of Education, Kim Samuel and the Samuel Family Foundation and Lions Club International.  In addition to the support from ESPN and others, Special Olympics & CIAC would like to thank local partners ESPN, Bob’s Stores, ConnectiCare, Campus Customs, Dylan’s Wings of Change, Frontier, Hometown Foundation, and Hoffman Auto Group for their support.

Beau Doherty, president of Special Olympics Connecticut, known to many as the first person who introduced Unified Sports to the Special Olympics Movement, comments on the expansion and growth of playing unified. “When I look back to that one afternoon in 1984 talking with Mrs. Shriver (Special Olympics Founder) about taking a chance and bringing people without disabilities onto the same playing field as our athletes – I never thought in my lifetime, I would see us reach over a million people playing Unified Sports.  I’m literally blown away by the scale and success of our Unified Sports programming around the world.   True social inclusion – the connections that people make through participating in
Unified Sports – is the end game. The day that I saw students in high school lettering on a Unified Sports team about 10 years ago made me feel that we were definitely moving down the path of true social inclusion.”

“Reaching 1.2 million participants in Unified Sports is such a significant milestone for our organization,” said Mary Davis, Chief Executive Officer, Special Olympics. “In the 40 years I have been involved in our Movement, the emergence of Unified Sports has been a key indicator of our success in breaking down the barriers that exist for people with intellectual disabilities.  Being a part of a team and competing at your highest level while also building lasting friendships is something everyone wants to be part of, and we are offering that opportunity to everyone. We are so lucky to have such amazing supporters including ESPN, Kim Samuel, the Department of Education and Lions Club International who have really catapulted us into making this milestone possible. Thanks to them, we are seeing more and more partners who want to join us and build Unified Sports and help inspire change on the playing field.”

A Look at the Facts:

Unified Sports is now in more than 4300 schools across the United States.  In the 2014-2015 school year, Unified Sports was implemented in 54% of elementary schools compared to 75% of middle schools and 81% of high schools. In total, 71% of schools implemented Unified Sports, an increase of 12% over the previous school year. An impressive 24% of all participants, or 1,560 people competing at the 2015

Thanks to the support of ESPN, Special Olympics also conducted an evaluation of Unified Sports programs worldwide to determine if Unified Sports impacts athletes’ and partners’ health, physical activity and sports participation outside of Special Olympics.   Some key results from the evaluations revealed that 89% of teammates said they are more comfortable talking to people with ID and 91% reported their sports skills improved. Based on these results, Special Olympics conducted focus groups on the meaning of inclusion with approximately 70 players and 35 coaches in 3 countries (United States, Bharat and Germany).  Qualitative results show the significance of friendship, sense of belonging to a group and access to opportunities on and off the sports field as indicators of inclusion.