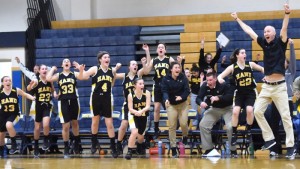 This memorandum is an updated from for CIAC member schools regarding coaching box markers for basketball.

Since the old rule already required a mark, 28’ from the end line, no additional floor markings are necessary to comply with the new rule. The mark 14’ from the end line is no longer applicable and should be removed, if possible. If it can’t be removed, it should be ignored by the coaches and officials.
The coaching box area shall be marked outside the court on which the scorer’s table and team benches are located. Measure 28’from the end line and put a line that is 3’ long and 2” wide. It is recommended to be the same or similar color to the boundary lines, but not mandatory.

Rationale for the NFHS Coaching Box rule change: The restriction of the coaching box penalizes the level of communication between coach and player. Allowing a coach freedom to move within the new box between the 28’ mark and the end line provides a coach more access to coach his/her players.