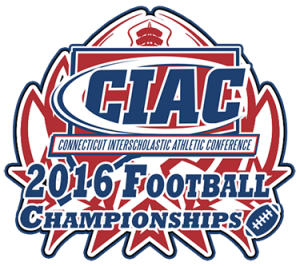 CHESHIRE, Conn. – The sites and times for the 2016 CIAC Football Championships has been determined following the conclusion of the eight semifinals this evening. The four CIAC football finals will be played Saturday, December 10 with two games apiece at Veteran’s Stadium at Willow Brook Park in New Britain and Ken Strong Stadium at West Haven High School.

Willow Brook Park will host the Class S final between #4 Rocky Hill and #2 Ansonia at 10:30 a.m. and then the Class L final between #2 New Canaan and #1 Windsor at 2:30 p.m. The Class M final featuring #5 St. Joseph vs. #2 Hillhouse will be at 10:30 at West Haven, followed by the Class LL final between #7 Ridgefield and #1 Darien at 2:30 p.m. Online tickets are available for each final and can be purchased at http://ciacsports.ticketleap.com/. All four games will be streamed live on the NFHS Network.

The online application for media credentials for the CIAC football championships is now available for submission at the following link: http://casci.ac/1709. After completion of the online form, media members can pick up their credentials at the respective sites. The deadline to submit credential requests is 10 a.m., Thursday, December 8. Each championship game will be credentialed separately, and press box access and field access will be limited to those covering the specific games. Media entities planning to provide radio broadcasts of championship games must complete the online credential form, as well as the Broadcast Application Form which can be found at: http://casci.ac/1410.

The CIAC Football Media Luncheon will be held Tuesday December 6 at the AquaTurf Club in Plantsville. The event is open to media members and representatives from each of the finalists should be in attendance and will be available to the media beginning formally at 11 a.m. with lunch and a program beginning at 12 p.m.