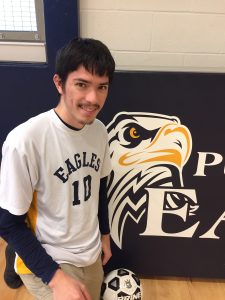 Go ahead, try and figure out a challenge Cristhian Zaldivar is unable to overcome. Over-and-over again life has put challenges in front of him that might block an average high school senior. But as those he’s come in contact with at CREC Public Safety Academy happily attest there is nothing average about Zaldivar; neither the challenges he’s faced, nor the things he’s accomplished.

The impressive list of accomplishments will get a bit bigger on Sunday when the senior joins 353 other stellar senior student-athletes when he’s honored at the CAS-CIAC Scholar Athlete Banquet.

Hearing his soccer coach and Public Safety Academy social worker Joel Weisel tell it, it’s an accomplishment that is well-deserved given Zaldivar’s impressive resume, and perhaps more than that, his attitude.

“He strives for excellence, he holds him self to pretty high standards and makes sure he is accountable to those,” Weisel noted. “When our coaches, administrators and athletic director sat down his was the name immediately thrown out. You know the school and committee as a whole felt like he’s the type of student you could put a PSA Eagle uniform on and you would want out in the community representing our programs and our school, just with the way he carries himself.”

Now in its 34th year, the CAS-CIAC Scholar Athlete program recognizes two high school senior student-athletes — one boy and one girl — from each member high school whose academic and athletics careers have been exemplary, who personal standards and achievement are a model to others and who possess high levels of integrity, self-discipline and courage.

Those are undoubtedly lofty standards, but given all he’s done, and the obstacles he’s faced to achieve them, Zaldivar comfortably ticks just about every one of those boxes. For him, it’s validation that the work he has handled in the classroom and on the field has meant something.

“It [being chosen as Scholar Athlete] makes me feel like I can keep moving forward, working hard, and am going to make a difference,” he explained. “I also feel like it allows me to leave something important behind for the school. It shows teachers and staff in the building that they have helped me and that I have learned from them.”

Take a look at exactly what Zaldivar has learned and accomplished. Start with the obvious achievements. A stellar student he will graduate as the Public Safety Valedictorian and is a National Honor Society member. Athletically he earned All-Conference honors multiple seasons as a competitor on the boys soccer team and following his senior season became the firs male athlete in any sport from the CREC system to be chosen as an All-State performer.

That would all be enough for just about any high school student. And those achievements featured challenges to be sure. But it is just a part of his story.

He came to the United States from Honduras with his mother and two siblings when he was eight, following his father who had come the prior. He spoke virtually no English when he arrived, but in what would be a growing pattern, he did not let that deter him.

“I did not want obstacles to stop me, and had to work hard to overcome obstacles (i.e. the fear of messing up),” he notes. “It also shows that all of the hard work that my parents have done for me is paying off.”

Weisel was in constant awe as he saw Zaldivar’s drive and focus up close time-after-time.

“When they came to the United States his parents placed a really strong emphasis on his education,” Weisel explained. “He holds himself to the highest standards to the extent he and I talk sometimes and I’ve said to him ‘hey you’re human, it’s okay if you take some time to enjoy some of the stuff you’re achieving as opposed to already starting to seek the next stage or next step.’”

One place he clearly did enjoy himself was on the soccer field where his play both provided him with an important outlet and aided in a maturation that might not have otherwise occurred.  While the at-times precarious conditions he faced in Honduras that prompted his family to come to the United States in many ways drove Zaldivar’s academic focus, the soccer field and his success there could be a cathartic distraction.

“Sports always kept me going, participation in athletics was a hobby, and it helped distract myself from stressful things going on in my life,” he explains. “I also learned character. In Honduras I was wild and loud. I learned to have respect and to work as a team to accomplish things together to and be accepting of different people. I also gained friendships as some of my team members have become like family.

While Zaldivar touts the things he gained from his involvement in athletics, Weisel recognizes it was a mutually beneficial relationship. The ability and perhaps more importantly generous nature of his athletic mindset paid significant dividends for a young program.

“That’s what his mindset is, trying to make those around him better,” Weisel stated. “With our program as a whole, this was only our third year as a varsity program. And frankly he could play at any high school in the state and as a Hartford open choice student he had the option to go other places if he wanted to. But he chose to stay here and because of that our program has really grown and he’s a big part of the reason we continue to grow.”

Growth is a good word to try and sum up all he has done and overcome to reach Sunday’s award ceremony. Determination would be another apt word. That’s the word that best fits what he says he hopes those who follow him and and his lead will take from what he’s accomplished.

“Learning not to give up on yourself, and not let obstacles get in the way of the goals you’ve set for yourself. Also, to lean on those around you for support.”

His accomplishments suggest he may not have needed all that much support, but with the support he received, Zaldivar paid it back in spades with all he has done. More obstacles surely await, but given his track record, there is little chance he will be stopped now.