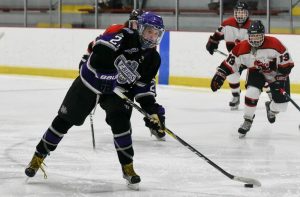 Adventure is a word that probably does not get used very often to describe a high school sports career, but it’s one that is particularly fitting. To use the incredibly clichéd trope, it’s defined as “an exciting or unusual experience.” That’s broad enough to cover a lot of high school athletics careers, but it still might not be the first choice for an athlete when thinking about how to summarize their interscholastic journey. Yet it’s the word that came to mind for recent North Branford graduate Brian McKee in describing the wild ride that was his highly successful athletic experience for the Thunderbirds.

And why not use the word adventure when looking at the broad scope of experiences in which the two-sport athlete McKee took part? He was a key contributor for the perennially strong North Branford ice hockey team during the winter. The spring season took on a completely different path as he competed for the lacrosse team as it grew from club, to junior varsity, before frist competing as a varsity program beginning in 2015. In the midst of it all was McKee, playing a leadership role as a captain and making a significant impact with his play.

“In hockey we were the first team to win a conference championship in our new conference, and we were the first [North Branford] ice hockey team to make it to the state championship twice,” McKee noted. “Then in lacrosse it was cool to see how the organization developed from a club sport to junior varsity and then varsity. So my athletic career was an adventure I will never forget.” 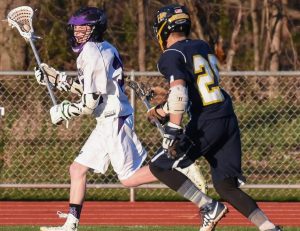 McKee took his leadership role seriously in both of his sports. Shore Publishing.

His exploits and leadership suggest the athletic department at North Branford will not soon forget him either. A captain for both the hockey and lacrosse teams he was an All-State performer in hockey along with being named team MVP as a senior, and he captured All-Conference honors in lacrosse. For the icing on the cake, he also excelled in the classroom ranking as one of the most successful students among the school’s athletes.

That isn’t to say it was all easy for McKee. The benefits of participating in sports can also be the challenge – learning to balance the rigors of sports and school, and trying to live up to the leadership responsibilities of being a captain.

“Being a captain really shows that role and you need to need to know how to get everybody involved; make sure everyone is on the same page,” McKee explained in noting the challenges of leadership. “It taught me to be positive even when you are losing a game because your teammates will follow your actions.”

His teammates didn’t have to follow his actions with a deficit very often, and more often than not they were following and joining him to significant victories. Those included the aforementioned first league hockey title, and the back-to-back trips to battle for the state title at Yale. One of those tournament runs provided a moment for McKee that definitely encapsulated the sense of adventure that defined his career. He slotted home the game-winning goal in double-overtime to send his team to the CIAC final in his sophomore season. That is the sort of memory that will stick around for a long time. (Highlight courtesy GameTimeCT & New Haven Register)

With so much on his plate, and so many positive things produced on the ice specifically, McKee did face the question many high school (and younger) athletes now consider – whether to continue participation in multiple sports, or focus his efforts in a single venue. It was not an easy choice, particularly given his desire to continue his hockey career at the collegiate level, but McKee’s decision to stick with multi-sport participation highlights his commitment and why he is a great representative of high school sports achievement. And he will continue to try and pursue his goals of competing at the collegiate level when he begins attending UConn in the fall with a goal of joining the hockey program in the future. 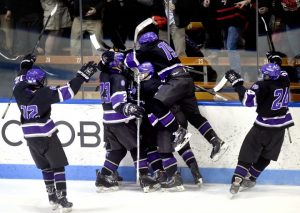 There was plenty to celebrate for North Branford in hockey and lacrosse during McKee’s career. Arnold Gold – New Haven Register.

“During my high school career, I was thinking about not playing lacrosse and just focusing on hockey,” Mckee explained. “But I stuck with playing lacrosse because I was going to miss playing with all of friends and I wanted play another sport and I was thinking I may as well stay with the two sports I have been playing my whole life.”

Playing and excelling for his whole life. That’s the story for Brian McKee. He has achieved great things on the rink, the field, and in the classroom while producing wonderful moments and memories. Certainly sounds like a worthwhile adventure.