CAS-CIAC To Add Six Distinguished Contributors To Hall of Honor 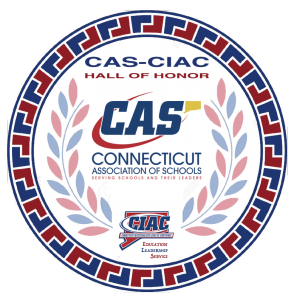 CHESHIRE, Conn. – Six distinguished honorees will be inducted as the third class of the CAS-CIAC Hall of Honor on November 10, 2017 at the AquaTurf Club in Southington. The six honorees, Dr. Mike Buckley, Mr. Beau Doherty, Mr. Joe Fontana, Ms. Pam Goodpaster, Mr. Dave Leete, and Mr. Larry McHugh, were selected for their exceptional service to the Connecticut Association of Schools – Connecticut Interscholastic Athletic Conference. Brief bios of the honorees can be found below.

The CAS-CIAC Hall of Honor was established to honor individuals who have made significant long-term contributions to CAS-CIAC in one of seven categories: educational leadership, athletic leadership, friend of education, contribution to education, contribution to athletics, service to education, or service to athletics. Tickets to the event honoring the inductees are available to the public and can be purchased here: https://gofan.co/app/school/CIAC. Please contact the CIAC for additional information about the event or for more bio information on the honorees.

Dr. Mike Buckley served CAS-CIAC in many capacities, including a highly-successful tenure as Associate Executive Director. A respected principal at Coginchaug and Avon High Schools he contributed as a CAS consultant and committee member before joining the central office where he fostered extensive expansion in the organization’s professional services including the growth of the University of Connecticut Administrator Preparation Program.

Mr. Beau Doherty is the President of Special Olympics Connecticut and was instrumental in the creation of the Unified Sports program and its partnership with CAS-CIAC. Since its inception the Unified Sports has exploded in popularity as Doherty’s enthusiasm and passion have helped expand athletic competitions to students throughout Connecticut schools providing opportunities that simply did not exist previously.

Mr. Joe Fontana (will be honored posthumously) was a key figure in the formation of the Connecticut High School Coaches Association (CHSCA) and its collaboration with CAS-CIAC. He was a legendary football coach at Southington High School and his efforts on behalf of CAS-CIAC were foundational in maintaining a collegial and beneficial relationship between the two leadership organizations.

Ms. Pam Goodpaster, a longtime teacher and athletic director at Joel Barlow High School, was a pioneer in the world of high school athletics in Connecticut. Along with her distinguished service at her school, she assumed leadership roles with the Connecticut Association of Athletic Directors, and was heavily involved in CAS-CIAC volunteering as a consultant for the CIAC Board and serving on several committees.

Mr. Dave Leete has played a pivotal role in the growth of boys lacrosse and the CIAC boys lacrosse tournament as part of a distinguished career as a coach, official, and AD. He’s widely recognized as a leader in the world of lacrosse officiating in Connecticut and the country and has supported CAS-CIAC as the longtime AD at Bolton High School and as the CIAC Boys Lacrosse Tournament Director.

Mr. Larry McHugh has contributed immeasurably to the world of education and athletics in Connecticut through his work with CAS-CIAC, the CHSCA, and several leadership positions with state higher education. After a highly-successful career coaching football at Xavier High School he has been involved with all aspects of education and athletics, and played a role in the development of the CIAC Football Championship.