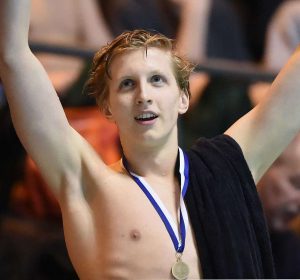 Ridgefield’s Kieran Smith added to his impressive resume with a pair of state record swims at the Open. Catherine Avalone – Hearst CT Media.

Away from the neon lights of Mohegan Sun and the extensive media coverage of basketball and boys ice hockey, the CIAC boys swimming and diving championships provided some of the most impressive performances of the year. It seems like a yearly tradition that a handful of records get toppled by the state’s top swimmers at both the Divisional Championships and the State Open at historic Kiphuth Pool, but the best of Connecticut outdid themselves this year.

It began with the divisional meets where a combined three state records and four meet records were set during the Class LL and L championships. The Wesleyan pool was witnessed to some speedy, record-breaking swims with Fairfield Prep senior Oliver Rus producing a pair of record-breaking efforts. He set a new state mark with a swim of 54.25 in the 100 breaststroke and topped the existing LL meet record with a  swim of 20.24 in the 50 freestyle. Diver Kevin Bradley of Norwalk/Brien McMahon also got into the record-breaking act with his total of 572.10 in the 1-meter dive establishing a new LL record.

The records continued to fall later that evening at the Class L Championship meet as South Windsor senior Tyler Branscombe set a new meet record with a time of 45.76 in the 100 free, and Peter Sloan of New Canaan notched a new L record in the 100 breaststroke by swimming 56.77.

And then there were the performances produced by Ridgefield senior Kieran Smith who spent the week treating the high school record book with such disregard it was as if it had insulted him personally. He began his championship season by besting his own existing state records in both the 200 and 500 free races at the LL championship. In both races he broke his existing record by more than two seconds. Not satisfied with re-writing the record book at the divisional meet, he would then go on to break both records again swimming 1:34.89 in the 200 and 4:18.83 in the 500. In three seasons Smith, who was named the Open Most Outstanding Swimmer for three-straight years, took nearly 10 seconds of the previous state record in the 500 freestyle and nearly four seconds off the previous mark in the 200 freestyle. He concluded a memorable career that ranks as one of the most decorated in the history of Connecticut high school swimming.

He also added to another record performance by swimming the lead-off leg for Ridgefield in the 200 medley relay which broke the previous Open record, but finished second behind the team from Fairfield Prep featuring Rus that established a new state record in a time of 1:31.56. Rus would also add another meet record to his resume for the week as he posted a mark of 55.18 to set a new Open standard in the 100 breaststroke. Also besting the previous Open record in that race was Andrew Bernstein of Ridgefield who placed second by swimming 55.19 just .01 behind Rus.

In the end the championship week saw six new state records established, and seven additional meet records broken. Two of the performances at Wesleyan also established new pool records at that facility, a remarkable accomplishment for high school swimmers at a venue that often hosts top-level collegiate and club competition. Amidst the craziness of a championship week that saw 17 team champions crowned (including Greenwich continuing its run of State Open swimming titles) the efforts of this collection of swimmers left a mark in the state record books that could hold for quite some time.