Thank you to all the schools that submitted entries for year five of the CAS-CIAC Battle of the Fans.  This event continues to grow and foster the sort of sportsmanship, fan behavior, student leadership and student participation that will make schools, parents, athletes and CAS-CIAC proud, and the participation from our member schools in the five years has been stellar. 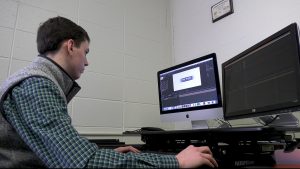 More than anything, “The Stable’s” success is a function of its cohesion. The benefit of a small student population and a dedicated group of student leaders is that the student section can all pull on the same oar. The message and spirit of the students comes together in one voice, supporting their teams. Similarly the group can come together and insure the student behavior stays supportive and respectful of the opponent. “The Stable” is open to everyone, it is not the exclusive province of the upperclassmen, because only together can the group be at its best. That also includes getting the support of faculty and alumni to buoy the current students in their efforts to support the athletes representing Immaculate.

The students of Immaculate know they are representing more than themselves when they file into “The Stable” for a game. There is a palpable pride when the students discuss the enthusiasm and energy they bring to every game, and also a belief that they are representing their school the right way. Now the “The Stable” has another thing for which they can be proud — being selected the winner of the 2018-19 CAS-CIAC Battle of the Fans competition.

Here is Immaculate’s submission video that helped earn them the Battle of the Fans title. The video was produced, written, filmed, and edited by Immaculate student Brian Douglas.