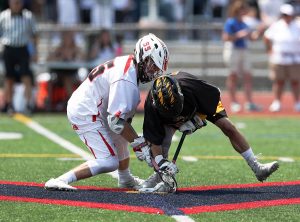 What do you get a championship tourney for its 25thanniversary? The 25this typically the silver anniversary, but the six teams taking the field at Brien McMahon High School for the 25thCIAC boys lacrosse championships are going to be more concerned with bringing home the golden state championship plaque. That leaves it up to the rest of us to honor the milestone and growth of the sport and its burgeoning success as an official CIAC tournament.

The spring of 1995 was not the first Connecticut high school boys lacrosse championship. The top teams in the state had been vying for a title in a tournament run by the lacrosse coaches and schools for several years prior to the sport becoming recognized by the CIAC. That move was significant for a committed group of coaches and administrators who thought the top teams deserved the official recognition of a CIAC championship – and that the official designation would help foster growth of the sport.

“It’s difficult to actually remember the first tournament – who played, what happened, and where it was held,” explained Ralph Mayo, current CIAC Boys Lacrosse Committee Chair. “But I remember how excited all the coaches were to finally be recognized by the CIAC. The coaches, really felt like they were legitimate. It was very exciting for all of us.”

The first tournament featured two divisions two crown a pair of champions. In an effort to promote more balanced tournament competition, the traditional divisional format based on enrollment was eschewed. The end result saw Wilton capture the Division I title with a win over New Canaan, and Fairfield defeat South Windsor in the Division II contest. 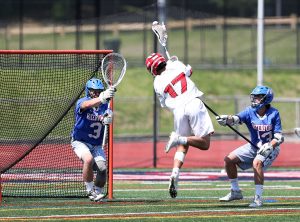 “The growth of the sport has been incredible and I think the goal of any high school kid when you get started in March is you want to be at Brien McMahon High School in June playing for that state title,” said current Foran boys lacrosse coach and Boys Lacrosse Committee member Brian Adkins.

Five different teams earned state titles in the first three years of the tournament, and a total of 18 programs have captured boys lacrosse crowns in the 25-year history of the CIAC-sponsored championship. While some perennial powers have emerged over those 25 seasons, the growth and expansion of the sport has perhaps even exceeded even the biggest hopes for the committee when the sport came under the CIAC umbrella.

In that first season 30 schools had a boys lacrosse team competing, with a total of 1,313 athletes on eligibility lists. In this 25th season, 99 teams representing 104 schools (five co-op teams) took part in the season with an eye on a CIAC title, which includes 4,052 total student athletes.

From a structural perspective, the biggest change came in 2006 when the boys lacrosse committee decided the growth of the sport warranted expanding to three divisions, determined by enrollment as most CIAC tournaments are. Perhaps as a reward, the committee saw that year’s Class L title game provide a stirring classic with Fairfield Prep outlasting Norwalk in four overtimes. 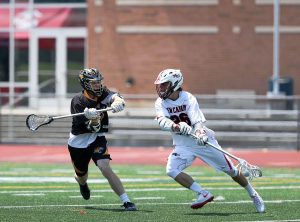 The following year was the first in which all three finals were played at the same location with Brien McMahon serving as the host. This change has now allowed lacrosse fans to know that on a Saturday in June, they will get to see many of the best players in the state on one field with a tremendous atmosphere.

“We moved the tournament to three games at one site, and that has worked so much better…it’s really a great thing now,” explained longtime Boys Lacrosse Tournament Director Dave Leete.

“When I was the head coach at Branford we won the state title in 2003 that was at Hamden High School,” Said Adkins. “Now when you come down that hill at Brien McMahon and you see a lot of people set up, and the atmosphere that day – it’s incredible for a coach and a player – it’s just goosebumps thinking about those times.”

Seeing the best players and teams in Connecticut means seeing some of the best teams and players in the country. There is no doubt that boys lacrosse has blossomed during these 25 years as a CIAC-sanctioned sport, and that the competitiveness fostered by competing for a state title has fostered remarkable teams and athletes. 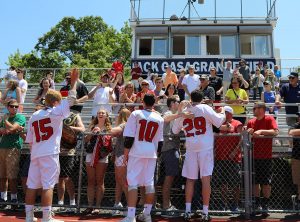 That may be the best thing about reaching a round number like this anniversary, which offers the opportunity to reflect. These past 25 years have been a boon for the sport, for member schools, the CIAC, and fans of lacrosse. Looking back only highlights that from where we have been the future looks nothing but bright.