George Synnott – A Thank You

“We will forever be known for the tracks we leave in other people’s lives, our kindness and generosity”
Mary T. Lathrap 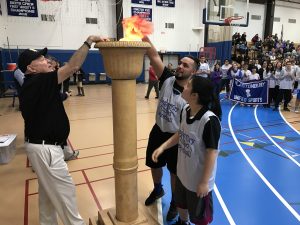 Selfishly, this piece is about me, and my family. But hopefully it’s even more about George Synnott and all the families like mine whose lives he impacted, whether he knew it or not. And about the families who probably didn’t even know his name. I want all those families to know that they owe him a debt of gratitude.

My son has intellectual and physical disabilities, and there is no question that every day is hard. But what scares me the most is the future. I go through great pains every day to do whatever I can to not let my mind wander into what lies ahead. In fact, that it’s often a struggle to get through each day is almost welcome, as it prevents me from ruminating too much on what’s ahead. Of fearing the many obstacles, challenges and the uncertainty of what his school world (and beyond) will look like. Fear of whether he will have a place, or if his educational experience is going to be a parade of ridicule and being ostracized. The fear is paralyzing. The bright light in the darkness of this constant fear is the existence of Unified Sports, and my knowledge of how it impacts the participants and transforms school communities. Myself and others owe a debt of gratitude to George Synnott for playing a significant part of allaying the fear. 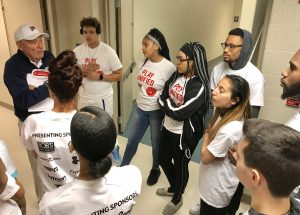 George Synnott passed away on July 20 after a lengthy and courageous battle with cancer. I did not know him personally all that well, despite working in the same building for six years. That is a failure of my ability to connect with colleagues then any indictment of him, but I offer it as caveat that many of the sentiments and impressions I’m sharing came from others. Those sentiments suggest that George was a beloved member of CAS-CIAC and the Connecticut educational community. Words like kind, generous, fun-loving, and caring were synonymous with George and applied to every stop on his career. They applied whether as a teacher and highly successful baseball coach at St. Paul Catholic, or during his long tenure as a teacher, assistant principal, and then principal at Berlin High School. And certainly when he assumed his role leading the CIAC Unified Sports program.

He touched lives wherever he went, by bringing that generosity of spirit and kindness with him in every job. His longtime friend and colleague Dr. Ted Sergi, the former Connecticut Commissioner Education, shared a story at his Memorial Service of how in their early years as teachers George suggested the (perhaps then) radical approach of genuinely inquiring about what was bothering a difficult student, to try and understand why he was acting out. It’s a telling story that highlighted his compassion and commitment to find a way to serve all students, which came to a head with his wonderful work leading the Unified Sports programs. 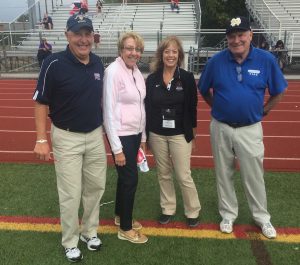 George would be the first to point out that he didn’t create Unified Sports, or make it a success. But he was tireless in making sure the programs were effective, and that opportunities continued to expand through the expansion of programs at all levels. A statistic he often cited was that 97-percent of public high schools in Connecticut now had a Unified Sports program. What he was likely too proud to emphasize was that number, while strong when he began his tenure as Director, continued to swell while he led the program. As did the participation at the middle and elementary level. George would, however, be the first to point out that the success of Unified is the result of the work of many people, and would surely highlight the efforts of the dedicated CIAC Unified staff that he seemed to genuinely love working with.

If his efforts needed a culminating moment, you could certainly see it at Mohegan Sun Arena during the CIAC Basketball Championships this past March. The Unified games at halftime of many of the basketball finals have been a highlight of the event for several years. That went to another level this year when packed house of several thousand fans watching the boys Division II final between Waterford and New Britain were treated to a contest between the Waterford and New Britain Unified teams at halftime. Though no records exist, our office believes it to be among the largest crowds to watch a Unified Sports contest, and the fans watched and cheered as though a state championship was on the line for those Unified athletes and partners as well. It is the very best of what Unified Sports is, and it was a vision George Synnott worked hard and passionately to bring forward. For me personally, seeing moments like those in person made me thankful that so many folks like George never stop working to spread the message of inclusion and to see it expand even beyond the Unified Sports courts, fields, and tracks. 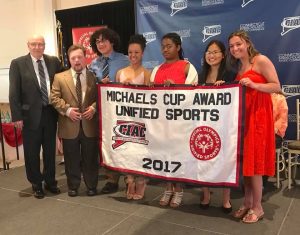 I often felt the temptation to thank George (and the other staff members) every single time I would see them in the office. To thank them for all they have done to open up the world for children with special needs and to push the boundaries of inclusion. I never really did it, for fear that constant thanks would be off putting, or generally awkward for everyone. Now I wish I wasn’t so timid, and offered those “thank yous” more freely. As insignificant as it feels given the circumstances, this piece is my best effort.

Thank you, George. On behalf of me and my family, and the families of countless athletes and partners whose lives were impacted by your work. Thank you, and bless you for making the world of education and the future and present for so many families and students just a little less scary.

In lieu of flowers, the family requests donations may be made to CIAC Special Olympics Unified Sports Program, 30 Realty Drive, Cheshire, CT 06410.