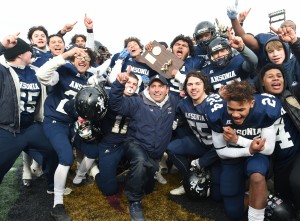 Fans of the CIAC podcast the CIACcast have become familiar the past six years with the week-by-week itinerary for the high school football season presented by Ned Griffen of The Day of New London. Each of the past six years, Ned joins the show to lay out one (sometimes more) game per week that fans of Connecticut high school football should be attending, and the compilation of his schedule provides a true cross section of some of the top teams and players in the state. We always indicate that trying to actually follow Ned’s schedule would be the mark of a TRUE Connecticut high school football fan.

This year, the CIAC wants to see who can live up to that title, by offering some incentive. You can check out the podcast, read Ned’s print version, or just see the details of his itinerary at this link: https://casci.ac/4880. At the end of the year, fans who have attended many of these games can email the CIAC’s Joel Cookson at jcookson

org with the total number of games on the list they attended — and the fan with the most will get some CIAC swag, and a pair of CIAC tournament passes which will allow them to keep following high school football through the CIAC postseason. Submissions must include some proof of games attended (photos of the final scoreboard, game programs, tickets, etc.).

So there it is. The Ned Griffen Ultimate High School Football Itinerary sits before you, starting with Derby at Watertown in week 1. Who is ready to show their commitment to high school football? We want to find out.