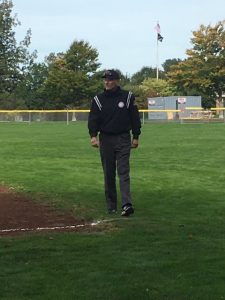 Editor’s Note: Connecticut is fortunate to have many officials serving Connecticut as representatives on NFHS Rules Committees. This week we highlight baseball umpire and officiating leader Bill Tatelman.

Bill Tatelman, who has been a member of the Hartford Chapter of the Ct Board of Approved Baseball Umpires for the past 45 years, serves on the NFHS Baseball Rules Committee. Bill has two years remaining on his four year term on the rules committee as the representative of the NFHS Officials Association. Elliot Hopkins, NFHS Rules Editor said, ““Bill is the consummate professional. He guides the NFHS Baseball Rules Committee as how umpires view the game and how a particular rule will be interpreted and cautions us if there is an unintentional consequence. He is a good baseball man with a strong sense and understanding of high school baseball. He is a benefit to our committee and represents the umpires around the country on the rules committee with dignity and class.”

Bill is an outstanding umpire who has worked countless CIAC tournament games and has been the crew chief and plate umpire for many CIAC championship games. Bill has been in several leadership roles with the Hartford umpires serving as past president, rule interpreter, new umpires committee member and a rep to the state board of umpires. He has been honored by several organizations. He received Distinguished Service Awards from the Hartford Umpires Board, American Legion baseball and he was the recipient of the prestigious Umpire of the Year Award from the Connecticut High School Coaches Association in 2014. Bill has also been a high school basketball official for 22 years and served as the president of the Central Connecticut Basketball Board #6.