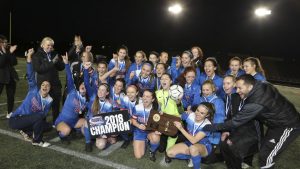 Soccer championship celebrations will be at two venues in 2019. Michael McAndrew – Hartford Courant.

CHESHIRE, Conn. – The eight CIAC boys and girls soccer championships will be held at two sites this fall as the renovated Dillon Stadium in Hartford and Veterans Stadium at Willow Brook Park in New Britain will each host four games on Saturday, November 23.

Game times will be 10 a.m., 12:30 p.m., 3 p.m., and 5:30 p.m. at both venues, and the final schedule of games, times, and locations will be determined at the conclusion of the semifinals on Wednesday, November 20. Neither site will be designated for just boys or girls finals in advance to allow scheduling flexibility.

“We are excited to create a championship atmosphere at two pre-determined venues for our soccer finals, as we typically do with most of our CIAC championships,” explained Gregg Simon, CIAC Associate Executive Director and Boys & Girls Soccer Committee liaison. “We think having two great venues hosting four games apiece will create destinations for soccer fans around the state as we strive to provide a great championship experience for the teams taking part in the games and their fans.”

The pairings for the CIAC Girls and Boys Soccer Tournaments will be released on Friday, November 8 and will be available on tournamentcentral.ciacsports.com.