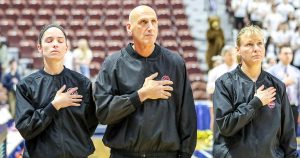 Upon returning to school and competition after the winter break, CIAC member schools and their winter teams have heave been invited to focus on something besides just their games and practices — saying “thank you” to the officials overseeing those contests.

Beginning January 9th, CIAC has invited its member schools to participate in its first ever “CIAC Officials Appreciation Initiative.” The purpose of the initiative is to reduce the negative actions towards officials, support positive sportsmanship, and combat the growing challenge of retaining current officials and recruiting new ones. The initiative encourages schools and their teams to make small gestures of appreciation to officials at all level of play over the course of the month.

CIAC provided its members with a list of possible recognition examples, but in the spirit of the Class Act Sportsmanship Program that empowers schools to establish its own sportsmanship efforts, the choice for how to thank officials is up to each school and team.

The idea for the Officials Appreciation Initiative, along with many of the suggestions provided to the member schools, originated from the recently revamped CIAC Sportsmanship Committee which is made up of administrators, coaches, athletic directors, students, and CIAC staff. Discussions from the group have focused on two primary areas of concern for member schools in regard to sportsmanship; treatment of officials and behavior of adult fans. CIAC began trying to assist its members to address adult fan behavior by creating a 30-second PSA featuring fall sport athletes (with a similar video featuring winter athletes coming soon). CIAC has also been collaborating with the members of its Student Athletic Advisory Board in working to address both these challenges.

The first CIAC Officials Appreciation Initiative will run through the end of January.