The Connecticut Interscholastic Athletic Conference announced today the distribution of cold water immersion tubs to 74 CIAC member schools throughout Connecticut. The tubs will be used by school athletic departments as a means of emergency treatment for athletes who incur heat illness brought on through participation in sports.

New emergency medical guidance requires that victims of heat illness are cooled as soon as possible in order to prevent serious consequences which could be life threatening. Nearly all other serious emergencies and injuries require stabilization and rapid transport to the hospital. Schools contract with local EMT services for that transportation. The revised guidelines still require calling 911 immediately, however the new regulations stipulate that for heat illness the victim’s body temperature must be lowered before transportation.

“The best way to lower body temperature for a victim of heat illness is to submerge the athlete in a cold water tub filled with ice,” said Marc Aceto, athletic trainer at East Haven High School. “Having a cold water immersion tub in proximity to athletic practices and contest venues is an essential part of all high school athletic emergency action plans.”

“We at the CIAC make student safety our first priority,” said CIAC Executive Director Glenn Lungarini. “We are glad to purchase and distribute these tubs to our schools that need them in order to help them keep kids safe during an emergency.”

The CIAC surveyed schools about their needs to fulfill an emergency action plan at each school. Athletic directors indicated that there was a need to acquire new tubs as the guidelines had changed. For those schools who didn’t have a tub, the CIAC provided one. The CIAC purchased the tubs with support from H.W. Hine Hardware in Cheshire, an ACE Hardware affiliate.

Aceto, who serves as the liaison to the Connecticut Athletic Trainers Association (CATA) for the CIAC, along with Samantha Scarneo-Miller, from the Korey Stringer Institute advised the CIAC in preparing a new Medical Handbook. The handbook was distributed to all CIAC schools last summer and includes a sample Emergency Action Plan with up-to-date guidelines for treating athletes suffering from heat illness.

CATA president Perry Siegel who serves on the CIAC Sports Medical Committee along with other members of the CATA offered to distribute the tubs to schools who were not able to pick them up at H.W. Hine, an undertaking that began on November 5th.

Lungarini was quick to recognize the collaborative effort; “CATA, The Korey Stringer Institute and the CIAC Staff all worked together to provide current information and support to our member school athletic departments. We want all of our schools to have the most up-to-date training and to be prepared for all athletic emergencies.” 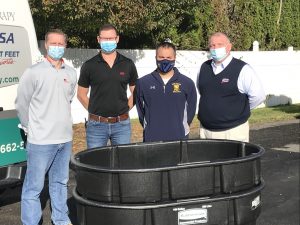