Posted on September 8, 2012 by Matthew Fischer 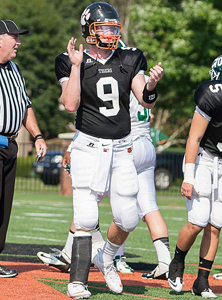 It was a comeback that brought that brought Woodberry Forest (Va.) coach Clinton Alexander to tears. And his team didn’t even win.

Alexander along with a nation was inspired to witness the return of his quarterback Jacob Rainey, who wore a prosthetic right leg during a 28-19 loss to Benedictine (Richmond, Va.) on Friday.

Rainey had severed an artery last season during a preseason game last season, causing partial amputation of his right leg. His fight back to the team’s home field Friday was nothing short of miraculous. He played a single series in the first quarter, led his team to a touchdown drive and was 1-for-1 for five yards.

Filed Under: Football, MaxPreps
← Soccer Rule Interpretation From The NFHS
Linked Up – 9/10/2012 →