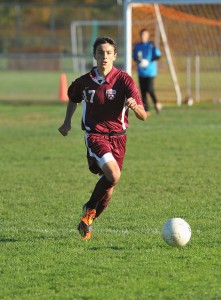 The Sheehan boys soccer team was one of several fall teams impacted by Hurricane Sandy. MaxPreps photo by Wesley Bunnell.

The devastation from Hurricane Sandy can still be seen around the state, and on the more trivial level the impact on the high school sports scene also still being felt. Whether it was schools that found themselves without power for an extended period of time, or the fact that the CIAC Soccer Tournaments will conclude the day after Thanksgiving rather than a week earlier, the super storm seemed intent on disrupting just about all areas of life in the state. But the creativity and resourcefulness the storm forced from Sheehan High School in Wallingford was something to behold.

Like everyone else dealing with the storm, Sheehan’s troubles began as the wind and rain rolled through on Sunday October 28 and Monday October 29. The challenges began to present themselves on Tuesday, when a custodial inspection revealed that the storm had ripped part of the roof off, leading to significant water damage. In the process of ripping up floors to deal with the water damage, asbestos was discovered, creating huge hassles for the entire school, but forcing the athletics department in particular to get creative.

“Anytime you have to do asbestos removal, no one under the age of 18 can go in there, so the processes ended up being two full weeks before we could get back in the building” explained Sheehan Athletics Director VJ Sarullo. “This meant the kids can’t even go in and get their equipment from the locker rooms, so we had coaches go in and retrieve anything they had in the lockers, then give it to the kids.”

This was not the sort of temporary inconvenience or crisis that a school and administrative staff likely have plans for. Rather, as the extent of the facility issues became clear, it also became more clear that the athletics department would need some more permanent solutions.

“If it had just been a couple days you can maybe try and do things on the fly, but when we realized it was going to be an extended period of time, and getting updates every three or four days, gives you an opportunity to at least call and make a plan of attack and at least not go day-to-day, which makes it a little easier,” Sarullo explained.

The school even moved moved its classes to the Oakdale Theater temporarily , but that didn’t solve the riddles the athletics teams faced. The outdoor sports were able to practice on their fields, but had to change at their houses or concession stand for practices and games. The girls volleyball team began practicing at nearby Lyman Hall, the cheerleading team bounced around to several different locations, and the girls swimming team also practiced at three different spots including the YMCA and Cheshire community pool. 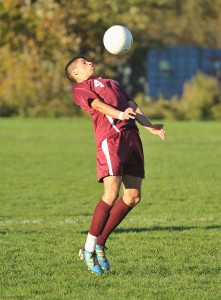 “It was just a lot of networking with colleagues around the area, and everyone was very accommodating,” said Sarullo. “Wallingford Parks and Rec was another area we utilized, and lots of people offered their facilities and we didn’t need them. Really just getting with the coaches, and asking what is the easiest way we can get this done and then from there, calling the other people we needed to call whether ADs or principals.”

“These days all the kids have smart phones so it was probably easier than it would have been even 5-10 years ago,” Sarullo explained. “A lot of

our coaches work in the building as teachers so they were getting updates along the way too, and we actually set up a Twitter account for Sheehan athletics last year, and that has grown to almost 400 followers so people were great about re-tweeting information to help spread the word.

The fall season progressed as normally as possible for Sheehan, with the football team going 1-1 since the storm, including a win in its first home game. The boys soccer squad won its opening round match on the road, before falling in the next round and the girls swimming team was 10th in the Class S Meet and 36th in the State Open. Both girls soccer and girls volleyball dropped their Tournament openers, including the volleyball team playing its home match at Lyman Hall.

The students were back at Sheehan on Tuesday, November 13, and while the fall sports had concluded before being able to enjoy the familiar surroundings, basketball practice was able to get underway in the home gym.

With all the disruption and upheaval it is easy to imagine high school students being angry or resentful about losing the creature comforts of their familiar athletic surroundings, or about having to play a home Tournament game somewhere other than their own gym. But perhaps most impressive about the logistical juggling Sheehan was forced to endure is how well the students responded.

“The kids were the easy part, it was the adults and coaches who had a harder time with it, but everyone handled it really well,” Sarullo said. “With kids if you told them they had to go play in their backyard, they would play in their backyard. Everyone adapted well, everybody was understanding of the situation. There were some days going into the morning we didn’t know if we were going to practice at Lyman Hall from 3-5 or 7-9, but everyone handled it really well. Everyone on the Sheehan staff was very flexible.

Sarullo cited an example of the students making the best of the situation where “while we were having classes at the Oakdale Theater they made ’Oakdale High’ T-shirts, sold them and the money went to Hurricane Sandy relief efforts so they were very accommodating and there was none of that resentment.”

So life and sports are back to normal for one Connecticut school where a little creativity and patience helped them weather the storm. Hopefully the same is true for all those that were impacted by Hurricane Sandy.