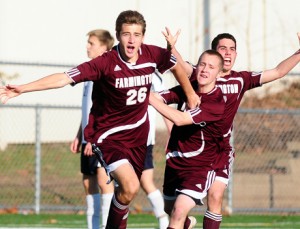 Farmington topped Avon in the first meaningful competition between the neighbors since the late-’80s. MaxPreps photo by Kevin Pataky.

The Farmington (Conn.) boys’ soccer team was celebrating its newly-won CIAC Class L championship on Friday when one player said to another, “Can you believe we beat Avon, 5-0?”

The Avon and Farmington boys’ soccer teams don’t see as much of one another as they used to. The neighboring towns used to play each another regularly in the now-defunct Northwest League. Both are passionate about their soccer, and it made for a great rivalry.

Avon left the league in 1985, ending the regular-season games. They last played a meaningful game in 1989, when Avon beat the Indians in the Class M semifinals.

The two teams scrimmage one another, but that’s pretty much the only interaction between the two, other than players bumping into one another at the local coffee joint.

It was a big deal, then, when Avon and Farmington finally hooked up again. Friday’s final drew an overflow crowd to Meriden’s Falcon Field.