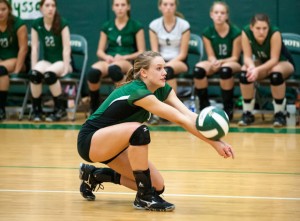 Marina Rose, a senior defensive specialist from Coventry (Conn.), is the MaxPreps Small Schools High School Player of the Year.

Rose, who is a three-time Gatorade State Player of the Year nominee, led Coventry to its seventh-straight state title. Coventry finished the season 24-0 and has a win streak of 76 straight matches.

Rose, who at 5-foot-9 played all over the court, had several impressive statistics, including a 78.9 percent kill percentage that led all high school volleyball players in 2012. She committed only seven service receive errors in 307 chances, and also had 409 digs and 92 aces with a 95 percent serving percentage.

The Patriots lost only two games all season. Rose lost just one match in her four seasons at Coventry – in 2009.

Filed Under: Girls Volleyball, MaxPreps
← Linked Up – Fall Championships – 12/9/2012
A Football Title Is One Play Away →