A Football Title Is One Play Away 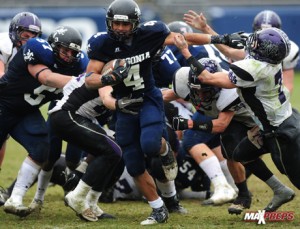 Ansonia ran away with the Class S title. Photo by MaxPreps.

Momentum can be a funny thing, particularly in the context of a sporting event. It can build slowly over the course of a game, as a team slowly takes control. Or it can happen suddenly, shifting from one team to another in a matter of one play. It is not always easy to tell if or when that elusive momentum has found its way into one team’s corner.

That was not the case at the 2012 CIAC Football Championship games as rarely will four games provide such clear examples of a shift in momentum. In each case those shifts stayed with the winning teams and played a large role in determining the champions. Rarely has momentum been as easy to pinpoint as the four clear, momentum-shifting moments playing significant roles in four teams hoisting a championship trophy this past weekend.

The most subtle moments came in the first contest of the weekend. For a brief period it seemed as though the momentum shift came late in the first half as Norwich Free Academy tried to pull off an upset of top seed Xavier. Two touchdowns in the span of 115 seconds of game action pulled the Wildcats within six points of Xavier and sent the team into the locker room burgeoning with confidence. Though the third quarter saw NFA surrender another score, it stayed in the game—forcing a Xavier turnover on special teams, and even holding firm in a goal-line stand. Norwich Free Academy was backed on the ropes, and with slightly more than a minute left in the third, Kristopher Luster picked off a pass for Xavier, returning it to the NFA 22-yard line. The next play was a touchdown run, and the knockout blow was sufficiently delivered.

The defensive effort in providing the big play was a concerted effort of the Xavier defense to stiffen in the second half. “We challenged the kids in the locker room at the half.” Xavier Head Coach Sean Marinan Sr. told the Middletown Press. “I talked to them a long time because I had a lot to say. I told them I thought we were wearing them down, but I said we had to come out in the next 24 minutes and earn it.”

Ansonia’s victory in the Class S final saw the momentum shift come relatively early in the contest. North Branford scored the first touchdown of the game, and was finding some success moving the ball in the first half. Trailing 14-6 and after forcing a turnover on a punt, the team faced a fourth-and-five at the Ansonia seven yard-line. Eschewing a field goal attempt, a pass attempt on fourth down fell incomplete. Five plays, and 93-yards later Ansonia was in the end zone and held a 22-6 lead with 8:21 left in the first half, and North Branford would get no closer than 14 points the rest of the way. Sometimes the key plays in the game can come earlier, and in this case, the momentum pendulum never swung back to the Thunderbirds.

“It gave the ball back (to Ansonia) I felt like had we converted on that, we would have grabbed some momentum,” North Branford coach Mark Basil said to the New Haven Register. “The game of football, so much of it is about momentum, and we weren’t able to capitalize on those things.” 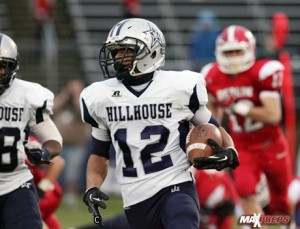 Hillhouse got a key third quarter stop to claim momentum in its Class M Championship win. Photo by MaxPreps.

A fourth down play also proved to be the pivotal moment in the Class M contest between Hillhouse and Berlin. Berlin had managed to build a 12-6 by stringing together a pair of time-monopolizing drives that ended in scores, and did so by converting on third or fourth down five times. Faced with a fourth and inches at its own 23-yard line midway through the third quarter Berlin elected to take a chance and go for it, and try to hang on to the ball. The attempt was stopped short, and Hillhouse took advantage, quickly finding the end zone five plays later to take a lead it would not relinquish.

“We wanted to control the game, especially against Hillhouse,” Berlin coach John Capodice said to the New Britain Herald. “We wanted to keep them off the field as much as possible. When you’re in this situation and you’re a significant underdog, you got to try and pull out all the tricks.”

“I was very surprised they didn’t punt the ball,” Hillhouse junior Harold Cooper told the New Haven Register. “But, hey, that’s what they do, and we knew we had to stop them on that down, and that’s what we did. We played Hillhouse football, and we stopped them.”

Defense was a key component of each of these critical moments, but the defense also provided the offensive impact in the turning point of the Class L Championship. Windsor battled top-seed Hand to a near stand-still midway through the third quarter, though Hand finally broke through and reached the end zone to take a slim 10-6 edge. On the ensuing possession after picking up a first down, Windsor fumbled a snap, and Hand’s Daniel Rogers scooped it up and rolled 42 yards for a touchdown and a 16-6 lead. Just like that, a snap of the fingers, the game had changed and Hand was completely in control.

“That play was enormous,” Hand coach Steve Filippone said to the Manchester Journal Inquirer. “Then we got another touchdown after that, and it really broke their backs. I think our nose man rattled their center a little to cause the fumble and after that Dan Rogers was right there.”

“That play changed the whole game around,” Windsor receiver Ryheime Moore said. “It killed all our momentum.

Football games are never decided on just one play, or one moment. But coaches will continue to preach the value of staying focused on every play, because it is never clear which play might be the turning point. The 2012 CIAC Football Championship games proved that one moment can come at any time, and it can determine which team ultimately celebrates at the final whistle.