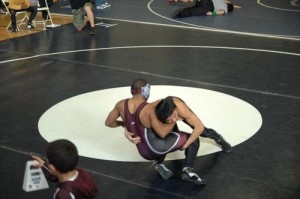 Just in time for the holidays, two wrestling teams provided a present for those who appreciate sportsmanship, generosity, kindness and camaraderie.

It was not an extravagant gesture, but it was something Jonathan Law (Milford) wrestling coach Matthew Schoonmaker knew he wanted to do. In fact, the idea came to him while sitting at the memorial service for his pupil Jet Dylan Krumweide. Jet died tragically in a kayak accident in late October. As the Connecticut Post describes, the vigil a week before his body was discovered, and his memorial service both paid fitting tribute to a person who touched all those who knew him.

One of those people was certainly Schoonmaker, who coached Krumweide at Jonathan Law, and was thrilled to see his former student stay involved with the wrestling program after he graduated.

“He was one of those kids who stayed in touch with the program and kept in touch after he graduated,” Schoonmaker stated. “He actually came back here and lifted weights some times, and rehabbed from his accident, and wrestled with my six-year-old stepson during his recovery.”

The sense of community and family surrounding the JLHS wrestling program drove Schoonmaker’s decision to try and find a way to honor his former competitor. He told his assistant coach, and then Jet’s parents that when the team competed in its first meet of the 2012-13 season that the team would not have a wrestler compete at Jet’s 160-pound weight class and the team would dedicate the season to him.

For Schoonmaker, the idea was an example of the spirit and atmosphere he tries to create within the wrestling team. 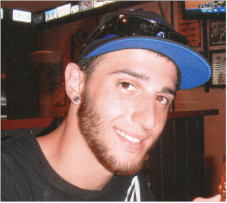 “None of the kids on our current team ever wrestled with Jet, so we weren’t sure how they would respond, but they were happy to do it,” Schoonmaker explained. “We talk about how this isn’t just a team, it is a family and we are all in it together. And that continues after you leave the program. This team is a young team, but they had the maturity to understand what we were doing.”

The story could have stopped right there. A gesture from a team and its coach honoring the memory of a former athlete gone much too soon would have been noteworthy itself. Wrestling meets don’t happen with just one team, and in the case of Jonathan Law its season-opening opponent was East Haven.

“I e-mailed the East Haven coach, just so he wasn’t walking in not knowing what we were doing,” Schoonmaker said. “We were really appreciative for what they did.”

What they did showed a wonderful sense of cooperation and turned the simple gesture into an even more meaningful moment to honor a student and deliver a master class in sportsmanship.

By rule if a team enters no competitor at a given weight class, as Jonathan Law did, the opposing team wins that class by forfeit. In this case, thanks to a team discussion East Haven had other plans.

“I talked to our captains when I heard what they (Jonathan Law) were doing and asked them if they wanted to do anything,” East Haven coach Paul Cicarella said. “Our guys first said we should just not take the forfeit, and then they wondered if there was something else we could do.”

With Krumweide’s parents in attendance (Schoonmaker had communicated with them and alerted them of the plan) East Haven also did not enter a competitor in the 160-pound class, rather than take the forfeit. The 160-pound contest officially goes in the records as a “no match.” The team capped the moment by bringing flowers to Krumweide’s mother. A rousing ovation from those in attendance followed.

“The team had a lot of thoughts about ways we could recognize him, in the end we thought getting flowers for his mom was the least we could do,” explained Cicarella. “We really did not think it was that big a deal, and we would have loved to do even more if we could. It was great to see the crowd respond the way it did for his family.”

The little act clearly meant a lot to the family, the Jonathan Law team and the fans in attendance. It was the sort of act that demonstrates high school sports can be about much more than just a loss or a win on a team’s record.

“It was a great gesture, and a great act of sportsmanship,” said Schoonmaker. “It is an example of wrestling being just a little different in terms of the teams working together. There is a connection with people involved in wrestling and it really is special.”

“Wrestling is a tough sport, and there is a great feeling towards other people that have gone through it,” said Cicarella. “Not to say that people in other sports wouldn’t have done the same thing, but there is a mutual respect in wrestling where our team thought it was right to pay respect to another wrestler.”

So a gesture from one team for a grieving family, turns into another gesture from another team, and suddenly there are two teams demonstrating everything good that high school sports can be. It might not come under a tree, but it is hard to imagine a better present than that.