Olivia Hompe Excels In All Areas For New Canaan 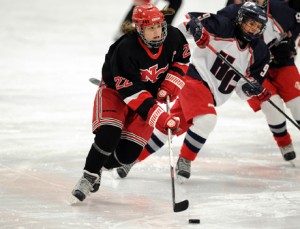 Olivia Hompe is a record breaker scorer in girls hockey, a standout lacrosse player, and is making an impact outside the sports arena. MaxPreps photo by Jim Stout

Olivia Hompe is one of the greatest scorers in national girls’ high school hockey history, but she’s going to miss a few games at the end of this month.

Hompe, a New Canaan (Conn.) senior center and captain, will have a good reason for being absent. She’s going to The Hague International Model United Nations in the Netherlands.

“We’re going as the Organization of Islamic Cooperation, where I’m trying to solve water access in Africa,” Hompe said. “It’s a really intense convention. There are only several schools from the United States, and New Canaan is the only public school.”

You’ve probably figured out by now that Hompe is not your average high school student. She stays busy with a number of Advanced Placement courses and is headed to Princeton in the fall, where she will play lacrosse.