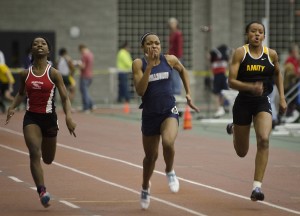 Fans attending the 2012 CIAC Indoor Track & Field Divisional Championships could be forgiven for assuming they somehow were witnessing the 2011 meet all over again. Not to say the fans didn’t get their money’s worth, but after a full day of competition the champions in the four girls divisions were precisely the same as the previous year.

At the end of the day, Glastonbury was the victor in the girls LL competition, along with Windsor in L, Hillhouse in M and Bloomfield in S. Repeat champions are certainly not exclusive to girls indoor track, but it is the lone sport that has two-time returning champions in each classification which adds an element of intrigue to the weekend’s festivities. Those festivities will get underway Thursday with the Class M Championship at 4 p.m., followed by the Class LL final on Friday. The Class S meet will be Saturday morning at 10 a.m., and then the divisional finals will wrap up with the L meet at 4:30 p.m.

Ironically, there were exactly zero repeat champions in the four boys class championships, so the most those teams can look for is a repeat scenario this year.

There is no one recipe to collecting multiple championships in a sport. Sometimes a team might ride the same group of athletes to titles in consecutive seasons, or a program could have a group of competitors step up and replace graduated seniors, or most likely some combination of these factors.

The question becomes whether this movie that played on repeat in 2011 and 2012 meets will remain on repeat as the 2013 class meets get underway on Thursday.

In Class LL last season, Glastonbury prevailed by a 17-point margin over Greenwich for its second-straight title, and fifth in the past seven years. The team lost several of its significant contributors on the track from last season, including some multi-event winners, but does have some of its top field performers back in the fold. Another win for the Tomahawks might have to come with new athletes stepping into bigger roles, something they did as the team notched the Central Connecticut Conference title last week.

Windsor earned its second-straight title by the narrowest of margins last season, finishing with 71 points to 70 for Darien which has finished as the runner-up to Windsor for each of its past two titles after winning the previous two years. A win in the FCIAC meet might suggest Darien will again try to knock off the defending champions but there are some valuable athletes returning for Windsor. A deep sprinting corps helped the Warriors dominate the relays as part of its victory last season, and many of those runners return. The team also fared well in the field events where it has some scorers back, but did graduate an event winner.

It has been three wins in the past four seasons for Hillhouse in Class M, along with a State Open title last season. The Academics are fresh off an SCC recently and have one of the top-ranked sprinters in the state leading their effort at three-straight crowns. The team claimed a win by almost 100 points last season and returns a large number of the point scorers from that meet. Though interestingly, many of those that earned points in the Class M meet last season were not seniors so there may be familiar faces across the board.

Finally in Class S Bloomfield brings a streak of three-consecutive titles into Saturday’s competition. Last year’s win came by 35 points over Immaculate, though this year’s biggest challenge might come from Weston which returned to the top of the SWC meet this past weekend and competed in Class M last season. Much like Windsor, deep sprinting leading to relay success and some standout field competitors were the keys for Bloomfield’s title, and many of those scorers are back in the fold for the Warhawks.

Which of these teams will be able to retain their hard-fought championships of last season? And will the boys meets maintain its recent parity? Those questions will be sorted out over the next few days. Teams contending for repeat titles or teams trying to keep their grip on crowns earned last season provide an interesting backdrop for the weekend’s competitions. Regardless of which teams and athletes prevail, the one answer available right now is that there will be no shortage of compelling stories and competitions over three days in New Haven.