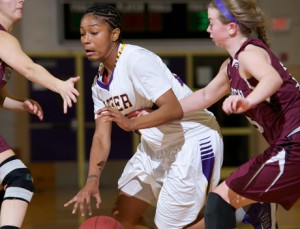 Tanaya Atkinson is averaging more than 20 points and nearly eight rebounds for Career as the team has rebounded from a slow start. MaxPreps photo by Wesley Bunnell.

The Career Magnet (New Haven, Conn.) girls basketball team headed into this season being told by others how good they were going to be. They returned four starters from last season’s Southern Connecticut Conference champions, and were the preseason No. 1 team in the state in the New Haven Register’s Top 10 poll.

Once the season began, however, the Panthers lost two of their first four games to fellow state powers Capital Prep of Hartford and Mercy of Middletown.

“People were trying to make us sound better than sliced bread before the beginning of the year,” Career coach Steve Bethke said. “I knew we were good, but jeez, they had us going all the way to the championship with no one giving us any competition.”

The early losses forced the Panthers to bear down. Since then, they’ve they’ve won 15 straight games.

“I do think that woke them up a little bit,” Bethke said of the early losses, “that if they did really want to be the best that they had to bust their butts a little bit more.”

Career is currently 17-2 and ranked second in Connecticut behind Capital Prep.