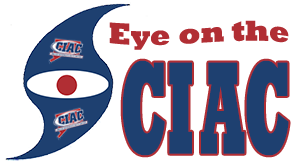 The Eye On The CIAC has clearly turned its gaze on the postseason as tournament play began in girls basketball and league tournaments abound in the other winter sports. There was plenty of action to check out, including brief recaps of the opening rounds of the girls tournaments.

RANKINGS WATCH
Each Monday we take a look at any major movement in the top-10 of the CIAC Tournament Rankings for those sports where it is provided. No girls basketball or gymnastics this week, with gymnastics having completed the season and the girls basketball tournament underway.

CIAC On TV
There will be basketball aplenty for high school fans this week along with hockey and other high school action to catch on CPTV Sports. Among the games will be broadcasts of boys basketball tournament contests on Thursday and Friday evenings.
Filed Under: Boys Basketball, Boys Ice Hockey, Boys Swimming and Diving, Featured, Girls Basketball
← Hockey Finals Schedule Changed
Cromwell Eyeing Perfect Season In Girls Basketball →