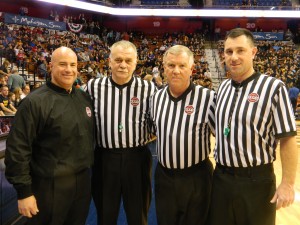 The circumstances are described as both storybook and a fairy tale for the team taking part in the state championship game. It had been a long road for the participants, and for two members of the team it was the culmination of long and storied careers.  But this story is not about the hard-working students on the Trinity Catholic and Woodstock Academy boys basketball teams playing in the CIAC Class L Boys Basketball final. It is about the three-man team in the striped shirts for whom the game provided a memory to last a lifetime.

See it was not just any old game for those gentlemen in the striped shirts. Not just because it was a tournament final. For veteran officials Steve Kirck and Pat Paulson it was the final game they would work after careers of more than 30 years as officials. For Steve Kirck II it was an once-in-a-lifetime chance to work a state final with his father before his retirement commenced. The magnitude of the opportunity was not lost on the three participants.

“Steve and I talked about it after the semi-final game we worked, and said it would be great to go again in the final,” Paulson noted.  “Then we found out we were going to do it again, and it was just a story-book way to close things up, in that setting and with Steve’s son working with us as well.”

For the elder Kirck the final game brought forward lots of different feelings appropriate to ending his officiating career with his son by his side.

“My feelings can be summed up in two things, one being a little bit of nostalgia knowing it was in fact going to be my last game. You never know as the tournament goes on how far you’re going to progress but once reality sets in that this will be your very last game after 40 years it is pretty nostalgic.  On the other side of it, quite honestly there was a lot of pride that I was able work it with Stephen and that it was his first state championship game. As I said to [Assistant Tournament Director] Tom [Murray] I can’t thank him enough for giving me that opportunity.”

The story was certainly different for the younger Kirck, who presumably has years of big games and state finals in front of him. But the extraordinary opportunity to take part in his father’s last game and do a state final was not lost on him.

“It was a humbling experience to be selected to work a state championship game for the first time to begin with. To then realize I would work it with my dad and Pat in their last games was an incredible honor.”

It was an honor that the officials recognize is not about them, but about doing their best to preserve the integrity of the game. Much like the game plan the coaches hope their teams execute, officials are all about teamwork and working with each other. It is evident in speaking to them, that each has a great respect for the way the other officials do their job, and what they have accomplished. Maybe more than any other profession, the officials are a community that have each other’s back and recognize the necessity of working effectively together. 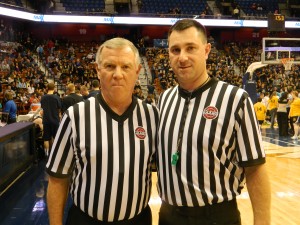 The Kircks are ready to go before the big game. Courtesy of Tom Murray.

“One of the best pieces of advice my father gave me when I started officiating was that to be successful you have to trust your partners,” Kirck II said. “Like the players on the floor, the refereeing crew has to work as a team. Whenever I was assigned a game with my father I knew we would have a great game. And I had that same thought and peace of mind walking on the floor for the championship game. If there were two people I could trust it was my Dad and Pat Paulson.”

This cooperation is true whether in the heat of a game, or in collaborating with other refs outside of the game atmosphere. Whether with informal meetings or clinics, or informal gatherings, it is a group that strives to be at its best when it matters, and to insure that the next generation of officials is as prepared as the current generation. In that way, the team that took the floor for the L final perfectly represented that generational connection within the profession.

“Early in my career I tried to be a sponge and would have dinner with other officials every Friday,” Paulson explained. “To hear them break down different situations and decisions what they did and why they did it. It really helped me improve and is a big part of the experience of being an official, to try and always get better and share what you’ve learned.”

Kirck II recalls a specific situation when those lessons from the experienced officials made a big impact on his career.

“The first game I worked was a middle school game and my father took me and said he would take some notes. He took 12 pages worth, front and back.”

Clearly officiating is more than just a hobby to pass the time for these three men. It is a big part of what they are, and a source of pride in the way they handle highly-competitive games. The commitment goes a long way towards explaining why Murray was perfectly comfortable assigning the trio to work a state final. 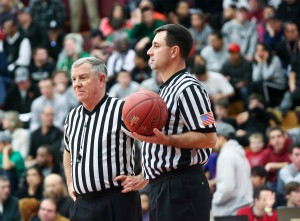 The Class L final was not the first big game the Kircks worked together, as they also handled the Simeon vs. Findlay Prep game at the 2012 Hoophall. MaxPreps photo from Lonnie Webb.

“When you have officials like these that you know you can count on, you want to put them out there all the time. You have the veteran folks who have proven they can do big games, and then the younger guys start to work in. It’s a comfort knowing you have a crew like this one that can handle the game.”

Murray continued his effusive praise for the veterans who closed their careers in the final, noting that all they accomplished throughout their careers merited a chance to do their final games on an appropriate stage.

“Steve has been at this for more than 35 years, and is really one of the premiere officials in the state. He is a terrific official and is seen as almost the father of officials in the New Haven area. And Pat is the sort of guy you would love to be in a foxhole with, because he will take charge and have your back. He is incredibly committed to the profession and wanted to go out on top with a big game.”

Even with the support of great teammates, all the pressure and emotion built up to a crescendo and would seem to be a challenge to manage in a championship setting. It is easy to see the emotion on the faces of the players from either the winning or losing teams at the end of a state tournament final. The smiles as wide as the Grand Canyon for the winners, and the heads buried inside the jersey to hide the tears for the teams on the short end are the telltale signs. The emotion was not going to be that obvious for the refs, after all, the goal of a good official is to not be noticed at all.

In this case, after handling a hotly-contested final with aplomb, the three officials were not able to keep the emotions at bay.

“We walked off the floor and went into the locker room and high-fived and hugged because we felt like we had a pretty good game,” Kirck Sr. stated. “No sooner there was a knock on the door and our whole family was there. They had convinced one of the security guards to let them come down to the locker room and to be surrounded by them was amazing. After a game you just say to yourself I hope we didn’t have anything to do with the outcome, which I don’t think we did, and for Pat and I to end our careers on that stage was terrific.”

“When [my dad] told me this was going to be his last year, I did dream about being on the floor with him for his last game,” Steve II said. “For that game to be in the state championship game was a fairy tale ending. Having said that, we still had a job to do and I thought we did that well also.”

That job was done, and it was time for the referees that concluded their final to reflect on the game and their careers.

“When I stopped playing softball competitively I left my shoes and jersey right on the field, and I joked I was going to do that with my sneakers and shirt,” Paulson laughed. “I ultimately decided that wouldn’t be the best idea, but there was a lot of emotion, and after it all was over we had a chance to sit down together and really appreciate what happened.”

For Kirck Sr. it was another in a long line of memorable final games, as he wrapped an officiating career that began humbly when a commanding officer in the Army ordered him to serve as the umpire for a tee-ball game. He closed that career a long way from there, on the floor of Mohegan Sun Arena.

“I decided early on in my career that I was going to go out on my terms,” Kirck said. “My last college football game was the 2010 Yale-Harvard game, which I had never worked before and my last college basketball game was the ECAC Division III Championship game, and then this game working at Mohegan Sun with my son and Pat were my three best memories from officiating so I was fortunate to end the way I did.”

It doesn’t matter if the experience is described as storybook, fairy tale, or just plain fortunate. The description is really irrelevant compared to the memories created by the three officials that will last a lifetime.

Filed Under: Featured, Officials
← CAS-CIAC Hosts Workshop On Issues Regarding Transgender and Students With Disabilities
CIAC Board of Control Report – 3/28/13 →