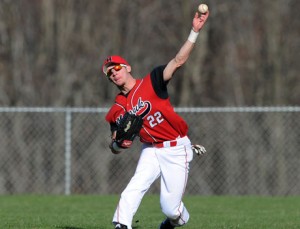 Thomas Milone of Masuk has grown accustomed to playing in front of a large number of interested observers. MaxPreps photo by Jim Stout.

DANBURY, Conn. — The scouts were scattered all along the edges of the Immaculate High baseball field here on Wednesday afternoon. They represented teams from as far away as the west coast.

The scouts had converged on Connecticut’s northwestern city to watch Thomas Milone, a centerfielder for Masuk (Monroe, Conn.)

“Yeah, I’m aware,” Milone said about the crowd he attracted, “but it doesn’t affect me. I just focus on the game. It’s all right.”

Masuk coach Ralph Franco said that the scouts have become a fixture at games this season. He believes it has helped the rest of the team handle pressure.

“On Friday, about every Major League team is going to be at our place, which is not the first time,” Franco said after his team’s 8-0 win over Immaculate. “A couple of weeks ago, we had every team as well.

“There were six to eight teams (here today). We’re going back to Masuk, and he’s going to hit again (for them).”

Milone, a senior, is one of the state’s elite players. He was ranked No. 59 onMaxPreps Preseason Top 100 National Baseball Seniors List, one spot ahead of Roger Clemens’ son, pitcher/first baseman Kacy Clemens of Houston Memorial. He’s already committed to play baseball at the University of Connecticut, where another former Masuk great, Jeff Hourigan, is a Jim Penders assistant coach and recruiting coordinator.

Filed Under: MaxPreps
← Newtown Girls Lacrosse Continues To Take On Challenges In Wake Of Tragedy
Linked Up – 4/19/13 →