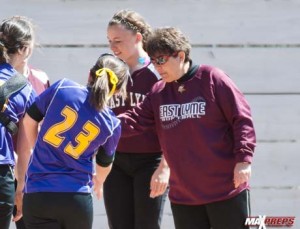 Sometimes the answers are surprisingly simple and straightforward. For example, getting to the heart of what has helped make Judy Deeb the career leader in coaching victories in the history of Connecticut high school softball. There are clearly a number of factors that contribute to the long-term success of the coach and the East Lyme program, but when explaining the biggest factor in her decades-long run, the simplicity of Deeb’s response was telling.

[Check out the stories from the New London Day, and Norwich Bulletin as well for coverage of the record]

That competitiveness has resulted in a record of 553-297 (.650 winning percentage) over a 42-year coaching career with wins over Waterford and then Ledyard on Friday having her tie and then pass the previous record held by former Hale-Ray coach Lou Milardo.

The same competitiveness that has helped propel her teams to a mountain of victories has her much more concerned with her resurgent team this season than with those wins in the past. After an 11-9 season a year ago and a loss in the opening round of the CIAC class L tournament, East Lyme is sitting at 14-2 this season with four regular season games on the schedule.

“Really excited about the team and happy with the chemistry of the team, everyone gets along,” Deeb notes. “At the end of last year I challenged the kids to work in the offseason, and they came ready to play, and I’m very impressed with the outcome. They get along, they did their work in the offseason, they work hard during the season and we are doing pretty well. Makes coaching a lot easier when you can just throw out nine players and say go play.”

If the team’s focus remains as sharp as that of its coach, there is reason to expect continued success going forward. If there was any doubt that Deeb’s focus was on the current season and not on any note in a record book, that was put to rest when it became clear she was unaware the state victories record was in reach.

“After the game on Friday I came home, and [New London Day reporter] Vickie Fulkerson called me,” Deeb explained. “She said ‘I want you to know before I put it in the paper you tied the record.’ Last year she had told me I was close to the record, but I didn’t keep tabs on it.”

While the numbers might not be something she keeps tabs on, when a coach earns 553 victories certainly some of them are going to stand out. Deeb recalled a memorable 1994 season as one highlight, as well as battles with a local rival as contests that are still fresh in her mind.

“In 1994 Ledyard had a tremendous softball program and they had a national record streak of 100-some odd straight wins, and we beat them to break their streak” she recalls. And [then] in 1994 we beat conference rival Stonington to win the state championship. We have always had our battles with Waterford, who we happened to beat Friday night. They are our local rival and they have always had a good program so it is always a highlight when we can beat them.”

While certain games and wins may stick out to the coach, compiling a record like the one Deeb owns also requires remarkable desire to keep coming back year-after-year with new players and new teams. 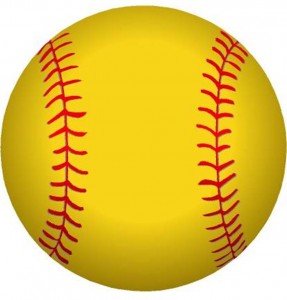 While the previously mentioned competitiveness streak no doubt plays a part in a coach continuing to hit the fields every spring, there is also a great love of sport and wanting to be involved with student-athletes that motivates Deeb.

“Along with coaching I started off teaching at the high school level, and 22 years ago I got transferred to the elementary school,” she explained. “And I really like it down there, but I like the older kids too, and this gives me a chance to work with the high school age girls who are completely different than kindergartners. It provides a variety for me and for my life. This is my way of staying involved with softball.

Her other way of staying involved in softball again shows a passion for the sport and demonstrates that her impact goes well beyond the fields of East Lyme and those 553 wins.

“I was selected to be on the softball committee the very first year, and I have been on it ever since” Deeb said. “I have been to every state championship and am assistant director now, and I’m really proud of that. I have seen and been through a lot of changes with the color of the ball, with the mound moving back, I have been through it since day one, and I’m really proud of that and very happy to continue to do that.”

A passion for the sport, an incredible competitive streak, and the desire to teach and remain involved with kids all adds up to a coach reaching an historic milestone. And with another simple and straightforward response, this record-breaking coach illuminates a selflessness and wide view that helps to explain the success.

“It’s [the record] important but I’m not really a number person,” Deeb said. “I like to give credit to the kids, the whole program, and my coaches, and everyone who has supported the program over the years.”

That group that helped established a new record follows the lead of their coach and focuses on what is ahead. In this case preparing to go just as hard after victory number 554.