Running Out of the Shadows 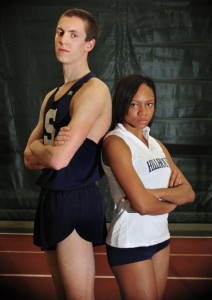 Henry Wynne of Staples and Precious Holmes of Hillhouse have been dominant forces in track & field over the past few seasons. Photo courtesy of New Haven Register.

Henry Wynne of Staples, Precious Holmes of Hillhouse and Weston’s Emily Savage have been dominant performers in the Connecticut and national track and field stage over the course of their careers. Their accomplishments rank among some of the greatest in the annals of the state, including national championships, state records, and state titles aplenty. Their departure from the high school ranks will provide a chance to see them try to measure up to the best in the United State will be a thrill, while there will be a touch of melancholy in no longer being able to regularly watch such exceptional performers.

Yet this story is not about those three record-breaking athletes. It is about the group of athletes who have spent parts of their high school careers in the very large shadows cast by that dynamic trio. Falling within that shadow is a large collection of runners and vaulters whose strong performances are no less diminished by finishing behind some of the best performers in state history. Sometimes circumstances and timing conspire against athletes whose only barrier between winning and placing second is the bad luck of squaring off with an all-time great. 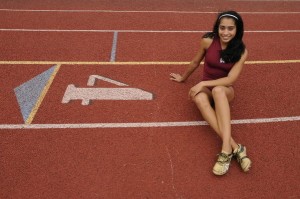 Windsor’s Sydnee Over ranks as one of the top track runners in the state with two runner-up finishes at State Opens. Photo courtesy of Hartford Courant.

It is easy to focus on the runner who crosses the line first, or clears the final height to earn the victory. Those achievements are clear as they can lead to records, and should be celebrated. Yet the nature of track and field is that while each event has one winner, each athlete is competing both against the field and against themselves. A runner-up finish might come as result of a performance that ranks as one of the best of an athlete’s career, even if it is not quite enough to claim first place. That these performances might be overlooked is an unfortunate by-product of taking on high caliber athletes along with the tendency to only appreciate the winning performances. In fact, some of these competitors have earned individual wins themselves in other events or meets.

The results produced in some ways are even more impressive when considering the uphill climb these athletes face in competing in their respective events. They enter the meet knowing they will likely be squaring off with some of the best performers the state has ever seen. They still possess the focus to compete to the best of their abilities and put forth a stringent challenge to these standout athletes. While it might not result in individual victories, the second-place finishes are still providing eight points towards the team total. These athletes in many ways are personifying the CIAC belief that competition in athletics is part of the educational experience, as they struggle with the challenge of incredibly talented opponents and continue to push themselves to improve.

During the 1992 Summer Olympics, one of the prominent shoe companies unveiled an ad campaign built around the slogan, “You don’t win silver, you lose gold.” Putting aside the somewhat absurd notion that being second best in the world in an event is somehow a huge disappointment, it raises an interesting point. There is room enough in athletics to both celebrate and honor the worthy victors for their achievements, while also acknowledging the efforts of those who put in their best effort only to come up just short. These ideas are not diametrically opposed, and that can be easily witnessed over the next few weeks of CIAC Tournament play, particularly in track and field. Celebrate the overwhelming talent of the decorated trio that has enjoyed incredibly success, but also note and applaud those who have accepted the challenge of competing against them, and have given all they have in an effort to earn a victory of their own.

Filed Under: Featured, Outdoor Track
← Eye On The CIAC
Linked Up – Spring Championships →