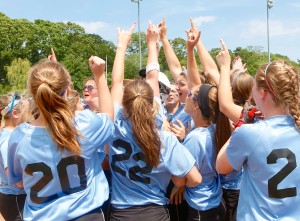 An incredibly stingy effort in pitching and defense keyed Oxford to a softball championship. MaxPreps photo by Matt Dewkett.

The cliché is that when it comes to baseball and softball tournaments, having dominant pitching is the biggest difference maker. Like any cliché, it arises from a combination of truth, history, and selective memory. Browsing through the recent history of CIAC baseball and softball tournaments – over the past 10 years – tournament champions have as often as not been earned on the strength of powerful offenses, a strong bullpen, timely hits, and even a little bit of luck.

However those who believe dominant pitching is the surest way to secure a CIAC championship in these sports are able to point to the performances of the Amity baseball, and Oxford softball team as exhibits “A” and “B” of how far overpowering run prevention can carry a team to a title. (Note, as of this writing the Masuk softball also fit the bill with still one tournament game to play). 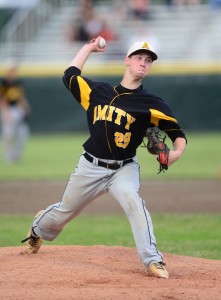 The headliner in the performance for Amity was Mike Concato who did not surrender a hit for nearly two full outings and did not allow a run over four appearances and three starts. But he was not a one-man show, as the Spartans also got two dominant starts from Sam Nepiarsky as well as shutout relief from Ross Weiner. That is not to suggest the offense didn’t play a key part as well, but overall the pitching was the story. In total, Amity surrendered just four runs in five victories, with three shutouts.

Just how rare is a team pitching performance of that ilk in the CIAC baseball tournament? In the past 10 seasons only four other teams have allowed less than a run per game while playing five games to capture the title. A handful of squads, including this year’s class L champions New Canaan, have allowed an average of a run per game during this time period, but coming in under that has proven to be rare.

The standard bearer for a dominant pitching postseason of the last decade was New London rolling to the 2009 class M championship by allowing a single run in five games, with four shutouts. Amity was nearly as good with four runs and two shutouts in five games in 2007 while Guilford in 2007, Immaculate’s class S run in 2004, and Sheehan in 2004 in the class M tournament also fit the criteria. That is a grand total of just five teams in 40 championship tournaments that have managed to shut down opponents with that level of success, putting some context on the impressive run the Spartans went on to earn a third title. 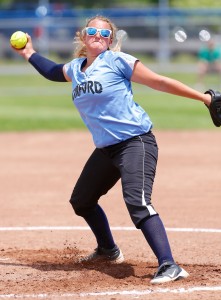 Ashley Guillette dominated in the circle for Oxford during the tournament, piling up 64 strikeouts and three shutouts. MaxPreps photo by Matt Dewkett.

That type of pitching and defense domination is a bit more common in softball where teams are better able to ride a hot pitcher who can roll through a lineup. Oxford’s run to the class S title this season featured the team allowing just a single run in its four victories. While Amity showed off some enviable pitching depth during its title run, for Oxford it was all about sophomore hurler Ashley Guillette. The second-year player went the distance in all four wins, allowing just one run, 10 total hits, while fanning a remarkable 64 batters. She needed to be just that good, particularly in the finale when the Wolverines plated only one run to earn its first state title.

Oxford’s overwhelming pitching and defense in the tournament was is not quite as rare as it was on the baseball side. Several teams in the past few seasons have managed to allow two, one, or even zero runs en route to a championship in softball, with the most impressive recent performance coming from Masuk winning five games, all by shutout, while earning the 2007 LL title. Terryville in 2010 and Seymour in 2009 both piled up four shutouts in four games while earning championships in those seasons.

Not every team needs an overwhelming performance from its pitchers (or pitcher) to win a state baseball or softball tournament. But when faced with the evidence provided by teams this spring, it is certainly a nice way to capture a title, and helps demonstrate why the pitching and defense cliché exists in the first place. When teams pitch and play defense to a historically great level, where scoring any runs is a victory, chances are a state championship will be the reward.