A Coaching Work Of Art Ends In Hall Of Fame 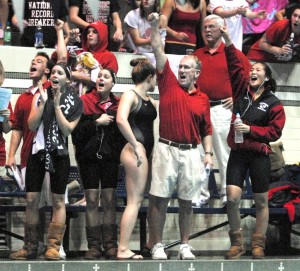 Former Cheshire coach Ed Aston and members of his team celebrate a performance at the 2008 State Open. Aston’s career has earned him a spot at the NFHS High School Hall of Fame. Brad Horrigan – New Haven Register.

There are a lot of different labels applied to coaches to describe their style or success. Words like motivator, teacher, genius, role model, and leader are tossed around on the positive side, while negative connotations are just as common. One description that is far less common would be referring to a coach as an artist. Whether or not former Cheshire girls and boys swimming coach Ed Aston possesses even an ounce of artistic ability, by embracing the mindset of an artist he was able to craft a coaching career that is worthy of Hall of Fame recognition.

For 37 years Coach Aston was at the helm of the immensely successful Cheshire girls swimming program (while also serving as the boys coach for 33 of those seasons). He oversaw a girls program that claimed 25 CIAC championships and won a national-record 281 consecutive dual meets from 1986 to 2011. His combined record for the boys and girls teams stands at 824-68-1 and his boys teams also claimed 18 state titles.

Those numbers have earned the coach a spot in the 2013 induction class for the National Federation of State High School Associations (NFHS) National High School Hall of Fame joining 12 other worthy selections including professional sports standouts Chauncey Billups and Joe Theismann, two other athletes, four other coaches, two officials, one administrator and one in the performing arts. The formal induction will take place Thursday, June 27 as part of the NFHS National Meeting in Denver, Colo.

“It is just nice that these people have thought that much of me and that my program had that much of an impact,” Aston said. “That somehow or other someone thought highly enough of me to do this it is just incredible. I got into the national high school coaching hall of fame and have won some other awards but certainly having spent my whole career in high school this is the ultimate honor.”

The resume leaves little doubt of Aston’s worthiness to be a part of the 31st class to earn the prestigious honor. But do all those wins and championships really rise to the level of artistry? The coach is not so presumptuous to assume that each victory or championship season can be described as a work of art. Rather, the art metaphor becomes appropriate to explain how a coach approaches each season and tries to insure that each team achieves its own measure of success.

“I always looked at each season that you were creating something when you have that opportunity to create, that keeps your interest,” Aston explained. “Each year was something different and each team was different. I often wondered with an artist when they paint a picture and look at it and see what a great accomplishment it is, I think you can do the same thing with coaching. You can create that image or picture and then you go to work on it and in the end see if you are successful.”

Treating each season as an individual entity and project began early for Aston as he worked to establish a successful program. Fresh off a strong college career as a competitor at Southern Connecticut State University he got his first start with the seemingly daunting task of coaching a team featuring the child of his college coach.

“I knew I wanted to get into coaching though I didn’t know what sport. My college coach actually wanted me to coach the club team his son was swimming on. He felt I had the goods to be a pretty good swimming coach, and I just thought ‘wow’ here is my college coach thinking I was good enough to coach his kid so that is where it all started.” 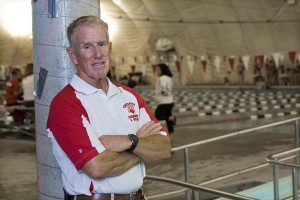 Continuing the coach as artist metaphor, one of Aston’s earliest insights was that he did not have all the answers and that like the athletes under his charge he could improve every season. He showed the foresight early on to help build a strong youth swimming program in the town, knowing that it would eventually bolster the high school program. And he devotedly tried new approaches in training tactics, keeping what worked and throwing out the methods he didn’t like.

“I went to a lot of clinics and read a lot of books and tried to bring in the things that might be useful. I honestly feel that coaching is a career where you beg borrow and steal from everyone, and then incorporate it into what you thing will be best and then add on or make any adjustments. There are a lot of great ideas out there and you would be crazy if you don’t use ideas that others might have, see if it fits and see if it is something you like doing.”

Like any overwhelming success story, there were bumps in the road along the way that while they might not have threatened to derail the program presented challenges. In those instances, the early foundation of achievement established by the program paid big dividends as Aston’s credibility had already been established. And as the eventual record-breaking winning streak rolled along, the athletes, as much as the coach, were responsible for maintaining a culture of success.

“Initially the kids bought in because it was a new team and then in our third year we won the state title, Aston noted. “The first year they are feeling you out, the second year they are going along with you and third year we win everything and from there everything became easier. The word spread throughout the kids, ‘listen to what he says’, everyone was buying into it. As the years went on, the tradition took over, kids were anxious to get into the program and they saw how much improvement the other kids had.”

Aston’s education background also helped him navigate the occasional rough waters of dealing with temperamental adolescents and the various highs and lows of coaching. His day job was working in the Waterbury public schools system, and his wide range of interaction with students helped him find a way to connect with his athletes and appreciate the uniqueness of coaching a high school team.

“I honestly believe my training as a teacher went a long way to helping me as a coach I was able to click the button for the kid in the inner city also helped me with the other kids,” Aston noted. “I loved high school swimming because every four years you had another cycle. I would much rather be in the situation I was in where you take the kids that come in there and you play the cards you were dealt.”

Throughout his long tenure consistency was the hallmark for Aston’s team as the programs continued to churn out dual meet victories and state titles. There were different competitors and challenges easy season for the coach, but that was part of the appeal that led him to never pursue or even consider other coaching positions. He was able to bring a consistent approach and message to an inconsistent profession, creating a system by which the finished product was always improved from where it began.

“The one thing I wanted to make sure, the one constant, was that there had to be discipline within the program and they had to do it my way,” he explained. “I always used to start my season off by telling the swimmers ‘let me be the one to screw up your season.’ If you listen to me at the end of the year then I have to be accountable. If you did not do well then you only have one person to blame and that is me.” 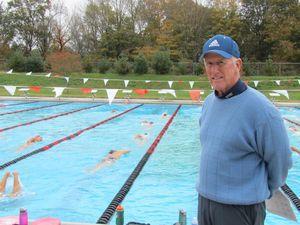 That consistency, over the course of a 37-year, is what leads to nearly 825 dual-meet victories and 43 state championships. There were certainly moments and seasons that stand out to the coach, highlights amid a career of them. He points to the dual-meet win that set the national record when and the 1991-92 season when both the girls and boys team captured their respective class and state Open championships, giving Aston four titles in one year. Those serve as a few of the standout moments in a career that is overrun with standout moments.

Yet for all the big moments, the records and championships, the students impacted with careers that continued into college and then into coaching careers for themselves, for Aston it was about the basic process of taking a team at the start of the season and seeing what they can become at the end of the year. More often than not that end product resulted in something incredibly impressive—giving some credence to the thought that a coach is a type of artist. In this case Aston is an artist whose masterpiece of a career will be displayed among other greats in a Hall of Fame.