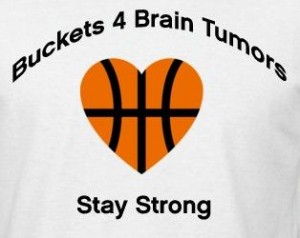 Simsbury will host Berlin in a boys basketball contest on Friday, January 3. There is not much to suggest this is anything more than an early season game between a pair of solid squads as Simsbury is off to an unbeaten start, and Berlin will be trying to bounce back after a triple-overtime loss. When the horn goes off and the game ends, each team will take the result and move on to the next game. Only the result of the game will pale in comparison to the results from the charitable organizational efforts of Simsbury junior basketball player JB Hayes whose life took a dramatic turn almost exactly one year earlier.

That dramatic turn will come full circle on the 3rd when the Hayes’ “Buckets for Brain Tumors” event will try to raise money for the Pediatric Brain Tumor Foundation (www.curethekids.org). T-shirts for the event have already sold out, and bracelets, lanyards and baked goods will all be on sale at the game as a means of raising more funds. In addition there will be a raffle at halftime with the proceeds also going to the Foundation. This particular organization, which helps fund research for childhood brain tumors and provides support for families affected by brain tumors, is near and dear to the heart (and head) of Hayes who overcame a tumor a year ago. It was that experience that made him focus on helping this Foundation

In truth, the fundraiser he has organized for the January 3 basketball game could do very little in the way of raising funds, and it would still be an easier day than he faced that same day in 2012. That was the day he underwent surgery to remove a tumor from his brain, only days after being rushed to the hospital after fainting in his home. Tests confirmed it was a viral infection causing his headaches and nausea, but fortunately an MRI discovered the tumor as well, which could have easily been missed. More good news followed as tests done after the surgery revealed the tumor to be benign, though this did not mean it would be an easy recovery road.

The one constant Hayes has experienced throughout the process has been overwhelming support from family, friends and teammates. He and his family had constant visitors at the hospital, had families bringing food by his house and offering to help around the house, and had numerous gifts sent to the hospital during his stay. Similarly his basketball family provided significant support and motivation during the recovery process.

“Being part of a basketball team really helped me stay strong and positive throughout my recovery last year,” Hayes said. “Many of my teammates came to visit me at the hospital and at my house. My coaches and some of the parents set up a live feed so I could watch the games from my hospital room. They gave me something to hope for, and that little hope helped me keep a positive outlook on my situation.”

The positive outlook paid off as Hayes slowly but surely began to regain his strength. A few weeks after the surgery he began moving around with a walker, and it took a few months to begin exercising regularly. In the late spring, he returned to the basketball court to play some pickup games and fill in on his AAU team. The best news came during his last checkup when the doctor said he would be able to live his life normally going forward.

For Hayes, “normally” now means trying to do his part for a charity that is now near and dear to his heart. Not surprisingly, the support he received during his illness and recovery has carried over into his fund-raising efforts. His goal of raising $600 has already been dwarfed as he has already received contributions totaling $2300, and that is before the main event tips off on Friday.

“The support that I have received has been incredible,” Hayes noted. “I never expected this many people would be willing to support my fund raiser. I’ve had too many people to count say they are willing to help and do anything they can in order to make this event possible.”

Fittingly for a student-athlete whose health future is now shiningly bright, he is also planning to continue his focus on working on behalf of his chosen organization. He already is planning another “Buckets for Brain Tumors” event next year when he has even more time to prepare, and his hoping his younger brother Nicholas (currently an 8th grader) will carry on the tradition in the future. It is a future that JB Hayes plans to make the most of, beginning with this special event where the adversity he faced will benefit many others. It is just one of the ways he is finding the positive in the challenges he faced.

“I have learned how important every moment is with my friends and family, and I intend to cherish every second with them I can.”

Filed Under: Boys Basketball, Featured
← Linked Up – Fall Championships
Check It Out →