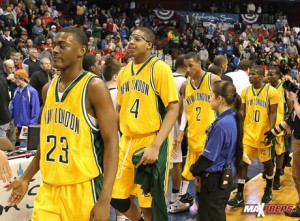 New London’s previous basketball success had come on the boys side. MaxPreps photo by Paul Stockman.

Lexus Childs-Harris remembers the bad old days during her freshman and sophomore seasons with the New London (Conn.) girls basketball team, a time in which she and the Whalers lost 35 of 40 games.

“I remember going home being frustrated and wondering why (we weren’t winning) a lot of the time,” Childs-Harris said. “We had the talent. I’d just wondered why we weren’t up to par.

“We did have the potential to be better than what we were.”

Childs-Harris is a senior now, and the bad old days are a thing of the past for her and New London. The Whalers (23-4) will play Morgan (Clinton, Conn.) in Sunday’s CIAC Class M final at Mohegan Sun Arena.