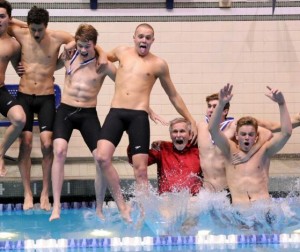 There was no overtime, no game-winning shots, or thrilling overtime goals. Amid the hubbub over the CIAC boys and girls basketball and hockey championships, the CIAC boys swimming championships took place last week. While it may not have had the fireworks associated with those other events it has something just as noteworthy; record after record falling like dominoes. When all was said and done after four class championships and the State Open, 13 class or meet records were established and a remarkable 10 performances bettered existing state records.

The record book was rewritten over the course of three nights with the biggest fireworks coming the evening of the class L and LL championships with so many jaw-dropping performances where so many records were established that one long-time observer described it as “arguably the best night of high school swimming in the history of the state.”

The ball got rolling with class S meet on Tuesday and the Weston squad posting a winning time of 3:13.53 to win the 400 yard freestyle relay and establish a new meet record. The meet record closed the meet and capped off the Trojans’ class S title.

If that meet, and that performance were the appetizer than the proceedings the following evening were a five-course feast. It was nothing new to watch Greenwich dominate its way to the LL title – the Cardinals have won all but one of the meets since 1993. But the see Greenwich and rival Fairfield Prep’s assault on the record book was nothing short of remarkable.

Standout Greenwich senior Alexander Lewis played a key role in the record-book editing as he won the 100 freestyle in state record time of 44.57, then broke his own state record with a mark of 48.59 to win the 100 backstroke. For good measure, he joined with his teammates to set new state marks of 1:31.9 and 3:02.60 to win the 200 medley relay and 400 freestyle relay respectively.

While Lewis shone brightly, he was far from the only one demanding the spotlight on this remarkable evening. The 200 yard IM saw two swimmers break the previous class record as Fairfield Prep’s Bryce Klebish edged Greenwich’s Thomas Dillinger with a time of 1:49.56. Dillinger’s mark of 1:49.68 was good for second and also topped the previous record. There was another double record effort in the 200 free relay with Greenwich besting the previous mark of 1:24.81 by swimming 1:24.19 while Fairfield Prep also was faster than the previous state record. One more class record came from Greenwich’s Edward Moss whose time of 20.78 in the 50 freestyle was .10 faster than the previous class record. That’s a total of seven events out of a total of 12 in the meet in which at least one competitor bested a previous record.

As if that wasn’t enough for one night, the Class L competitors decided they wanted in on the record breaking, and provided three new class records in their championship meet to add to the record onslaught. The 200 IM provided another pair of record-breaking efforts with Middletown’s Matt Dagenais topping the existing class record by more than a second in a time of 1:50.43, and Patrick Savidge of South Windsor also going past the previous record while finishing second. Wilton’s Thomas Kealy did his part to edit the record book by swimming 49.83 to set a new class mark in the 100 butterfly, and John Whiteside of Ludlowe notched another class record with his time of 50.57 in the 100 backstroke.

Continuing the food metaphor the luscious desert after swimming fans gorged themselves on the record-breaking feast of the LL and L meets was the Open Championship. The Cardinals and the Jesuits relay teams continued their erasing of the books as both teams bettered the marks they set just days earlier. First Fairfield countered Greenwich’s winning effort in the 200 free relay, posting a new record time of 1:23.18 to win the event. Greenwich had the final say as the team closed its team championship performance by shattering the record it set in the 400 free relay by swimming 3:00.59, going more than two seconds faster than their effort at the LL meet. In both relays, the runner-up team also broke the records set earlier in the week. The 400 freestyle relay time is the third-fastest in high school history, according the NFHS Record Book. (The final lap of the race is embedded below)

Greenwich’s Lewis was also not done writing his name into the books as he blitzed the field in the 100 freestyle and took his own state record even lower with a time of 44.16. He also added a new meet record by swimming 49.08 to win the 100 backstroke, and was part of another meet record with his teammates opening the meet with a record time of 1:33.06 to win the 200 medley relay.

The mind boggles at the overwhelming nature of these records and performances. Piled on top of each other it seems as though more records were broken than survived over championship week. It might not have carried the same drama of an overtime game, but the impact and the memory of the past week of swimming will be remembered for a long time.

Filed Under: Boys Swimming and Diving, Featured
← Linked Up – Winter Championships
Linked Up – 3/28/14 →