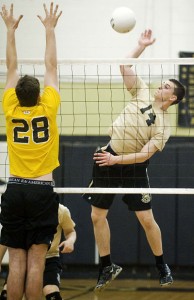 Part of the appeal of each high school sports season is seeing which teams are able to bounce back from disappointing seasons – or stretches of seasons – and start fresh in a new campaign. Teams grow, mature, and improve in a lot of ways in the downtime between seasons and each new season provides a blank slate. This season in boys volleyball Joel Barlow is the team making the most of its blank slate this season.

Over the fourteen previous seasons the CIAC sponsored the boys volleyball championship the Falcons enjoyed some success and some less-than-successful seasons. The high point was a 15-3 season back in 2003 when the Falcons also reached the class M semifinals. The recent history has been less kind with three under .500 seasons in the past four years including a 5-13 campaign last year.

The 2014 season is a completely different story. Third-year coach Chris Lovelett oversees the biggest turnaround in boys volleyball this year with the Falcons sitting comfortably near the top of the class M playoff rankings with a 12-4 record. The 12 wins matches the second-most Joel Barlow has produced in a season and still has a pair of contests left on the regular-season schedule.  With a seven-win improvement already guaranteed, the question becomes what is different this season? Not surprisingly the answer is many different things.

“The biggest difference is experience,” Lovelett noted in suggesting what has fueled this season’s improvement. “We have a few guys who really gained some experience at this level the past few years and have now realized they have the potential and capability to have a good year.”

The Falcons’ roster features three seniors with extensive varsity experience in Ethan Schloss, Joe Sarich, and Garrett Palmer. Fellow senior Scott Colby joined the team this year, providing additional maturity and fitting in seamlessly with the team concept. While the varsity experience can be useful, there has also been a change in mindset and approach for the Falcons that paid dividends.

In early team meetings the players expressed the sort of expectations and hopes that can be chalked up to youthful exuberance for a team coming off a 5-13 season. Instead, Lovelett worked to change the focus from the big picture to the small picture.

“We have a great group with experience, but I told them ‘my focus is to win the first game,’” Lovelett explained. “The goal has been to play out the season game-by-game, putting the focus squarely on volleyball, and putting the focus on the next day.”

The focus and experience were put to the test at the very start of the season. In the season-opening match to Darien, Joel Barlow fell behind two-sets-to-none. The Falcons showed its mettle, winning the next three sets – including a spirited 26-24 win in set four – to earn the 3-2 win and open the season on a positive note. For a team trying to make the most of its new season and blank slate and reinforce the new mindset, it was a critical first step.

“Winning that first match the way we did was just huge,” Lovelett noted. “To get that win against a good team with a great coach it really validated the message and was a big boost in confidence. We’ve seen that winning helps confidence and confidence helps winning so starting like that was key.”

A key early reinforcement of a mindset is helpful, and experience against good competition is also important. Experience means more than being in familiar positions and having more repetitions under your belt. Experience can also represent a maturation process that makes handling all the situations arising during the course of the season a little bit easier. It is that type of experience which has been another critical piece in the Falcons’ turnaround.

“Maturity plays a big part in what we’ve done this year,” Lovelett explained. “We had games last year where we built leads and weren’t able to hang on to the leads or pull it out. This year they have had a different mentality and been able to keep the focus and finish off some of those victories.”

The increased maturity and on-court success have been exciting developments for Joel Barlow this year. While expectations for translating the regular-season improvement into postseason success may be tempered slightly with two losses apiece against class M teams they might eventually meet in the CIAC postseason, even looking towards what might happen in the postseason runs counter to the philosophy that has helped drive Joel Barlow’s improvement.

“We’re trying to not lose sight of what has worked this year, and that is keeping the attention on having a winning mentality and the focus on the present tense,” Lovelett said. “If we just keep focusing on the next day we continue to see the results we want.”