Hanging On To The Crown 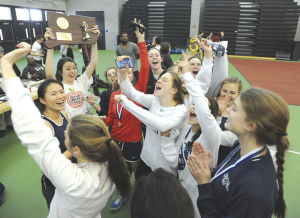 Which teams will be celebrating when the 2014 CIAC track & field championships conclude?. – The Norwalk Hour

The first CIAC championships of the 2014 spring sports season will be crowned less than two weeks from today as the class M and L outdoor track & field championship meets take place at Sheehan and Middletown respectively.

With 18 events across five divisional championships and the State Open there will be plenty of great performances and stories from those six meets. For every championship one of the compelling questions is whether the defending title holders can maintain a grip on that coveted trophy or whether different squads emerge to claim a title of their own. That question is brought to the forefront for the track and field championships in particular as more than any other sport, the 2014 championships will feature an abundance of teams trying to maintain steely grips on titles.

Heading into the 2014 championships each divisional championship on the girls side, and two on the boys side have teams looking to earn a title for at least a third-consecutive year. That’s a nearly unprecedented run of dominance for these programs who will try to fend off worthy challengers at the championship meets. Among those programs are Windsor and Bloomfield which managed to capture titles in boys and girls competition in 2013 and have matched that feat for three-straight seasons. In addition, Bloomfield is coming off the 2013 championship season in which the Warhawks became just the fifth program, in the 36 years in which Open champions were crowned, to capture the Open championship in boys and girls competition.

Overall there are seven track and field programs heading into the championships in two weeks with designs of keeping their title streaks of at least two years alive. On the boys side Windsor has reeled off three-straight title in class L, while Bloomfield has a run of four-consecutive titles in class M. If it continues, that streak will move to a different class this season, as the Warhawks will be taking part in the class S meet this season. On the girls side all five teams are trying to keep their time atop the podium intact. Norwich Free Academy has captured the past two championships at the class LL meet, while the Windsor girls are on a run of four-consecutive class L titles. Hillhouse has two-straight MM titles in its trophy case and Tolland has topped the M meet in each of the past two seasons. Then there is Bloomfield which has won six-straight girls class S titles, and has collected the Open Championship for two-straight years. Bloomfield’s six-year class S title run is the second longest in CIAC girls outdoor track & field history behind only a streak of eight-straight titles for NFA in class LL from 1994-2001.

There will certainly be many record-breaking individual performances and compelling team stories in track and field as teams vie for championships in the coming weeks. Whether or not challengers can find ways to knock off the kings will certainly be one of them.