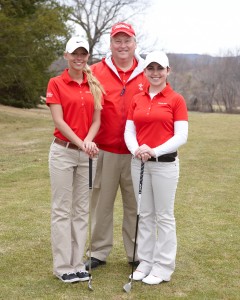 In the first 10 years of the CIAC Girls Golf Championship, two was the magic number. Four different programs managed to win two championships, with three of those programs winning the titles in consecutive years. For New Canaan, Danbury, and Staples claiming title number-three proved elusive, but three became the lucky number for the Berlin girls golf team at the 2013 championship at Orange Hills Country Club. The Redcoats’ score of 358 was good for a third-straight title and a little bit of CIAC history. With the history written and the trophies in the school trophy case, the question facing Berlin and the teams looking to unseat them is a simple one; what happens next?

If the Berlin team and coach have their way what happens next is simply changing that new magic number from three to four. The team has already made history with the third championship, and with the regular season winding down the focus turns to keeping the title streak going.

“The girls decided early our motto this year is ‘expect more, expect four’ so they are determined to win another one,” Berlin head coach Jim Barnes said. “Once the season starts we stress to the girls that what we did is behind us, and we will strive to play our best at the championships.”

Any golfer knows that showing up to the course (or the season) with a plan is one thing. Executing that plan is a whole different matter. The regular season results might not show it, but executing the plan in pursuit of the fourth title did not proceed entirely as expected. Berlin boasts an unblemished dual-match record on the season, including wins over local rivals Avon, Simsbury, and Farmington, yet early in the season those wins didn’t reflect the sort of golf that leads to adding championship totals.

“In the first third of the season if I was grading, I probably would have given us a D-,” Barnes noted. “We lost our swagger in the first part of the season, but in the last five matches we’ve posted better scores and have narrowed the gap in scoring differential against Greenwich and Staples. I would give them an A for their recent play.”

Those grades average out to roughly a B which would not put them at the head of the regular season class. That corresponds to the current girls golf rankings on CIACsports.com in which Greenwich and Staples sit first and second respectively in scoring average, with Berlin occupying the third spot. If Staples were able to earn the title this season it would bring its total to three, matching Berlin’s magic number from last season.

The Redcoats clearly have designs to prevent another team matching their championship total and earn a fourth title of their own. It has been a slow and steady progression for the program as it steadily climbed into a position to challenge for championships. The team placed 13th at the CIAC final in 2008, 10th in 2009 and then vaulted to fourth in 2010 before starting its run of titles. Barnes credits the support and advantage of its home course Timberlin Golf Club along with the confidence that comes from competing at a high level for the program’s development into a record-setting squad.

“Timberlin has been great to us in terms of availability for practice, and it’s a tough course which prepares our girls well for taking on other course,” he explained. “We were just able to get the ball rolling with the first title and success has bred success.”

That success is personified with a group of juniors who are trying to win a third state title in their careers, led by defending individual medalist Julia Kemmling. There is inherent pressure that comes with maintaining the high standard of championship success the Redcoats have established over the past three seasons, and that challenge is one of the hurdles in pushing for title number four.

“Our veteran players have become familiar with the championship atmosphere and like that pressure, but it has been a challenge for some of our younger players,” Barnes said. “We lost two senior co-captains so we’ve been working with some of our sophomores to try and build their games and getting used to facing that pressure.”

The pressure will be on for all the competitors and teams at the championships on June 10th, as the growth of the sport across the state serves to increase the competition level. With the rankings readily available at CIACsports.com it is easy for players and coaches to have a strong feel for what might lie ahead and what obstacles they will face at the championship.

The available knowledge presents both the opportunity to know what may be required to claim that championship trophy, and the challenge of keeping the competitors focused on the things they can control.

“The championship is fun for the girls as they now get to play with some really good players they might not have seen during the season,” Barnes said. “At the same time, the girls laugh at me because I always tell them their opponent is the same every match because they are playing against the golf course. One of our girls played on the basketball team and I point out it’s not like basketball where you can ‘D’ up your opponent.”

While it won’t be the traditional defense of basketball, come June 10 at Orange Hills Country Club, the Berlin girls golf program will be defending something. Its defense will be aimed at bringing home another championship trophy, and keeping it out of the hands of the competitors, and defending its well-earned reputation as the program with the most championships in CIAC girls golf history.