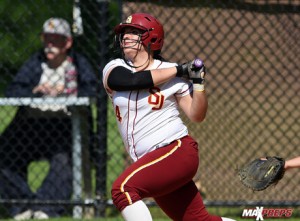 Lauren Pitney is one of the players powering a potent St. Joseph offensive attack. MaxPreps photo by Jim Stout.

The St. Joseph (Trumbull, Conn.) softball team has avenged itself once already this season. The Cadets have one more matter to take care of — going further than the second round of the CIAC Class M tournament and winning a state title.

St. Joseph routed Darien last Thursday, 12-1, to win its first FCIAC title since 2007. Darien was the only team that beat St. Joseph during the regular season.

On Monday, the third-seeded Cadets trounced No. 30 Wolcott, 15-0, in a Class M first-round game.

“We’ve been scoring a lot of run this year,” St. Joseph coach Jeff Babineau said. “They have a lot of talent. We have a couple of good power hitters, and they worked really hard in the off-season. They put the work in.”