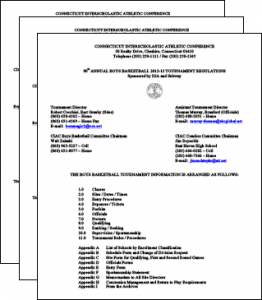 CHESHIRE, Conn. – The CIAC has posted the 2016-17 CIAC Handbook and Tournament Packets for all fall sports with all the information available for view and download on CIACsports.com.

The CIAC Handbook contains all rules and regulations and policies, including changes voted on at the 2016 Annual Meeting and is effective as of July 1. The Handbook can be downloaded here. The Handbook was condensed slightly and reorganized this year to eliminate redundant and conflicting information so information may be in different places than previously. Users should check the index to assist in locating specific information as it may be in a different location.

Each tournament packet includes valuable information including tournament dates and entry procedures, playing rules including NFHS rule change and all other information regarding the administration of the specific sports. Points of interest and or confusion and emphasis from each packet are highlighted below, but coaches and administrators should familiarize themselves with the entirety of the packet, in particular relevant dates and entry deadlines and procedures.