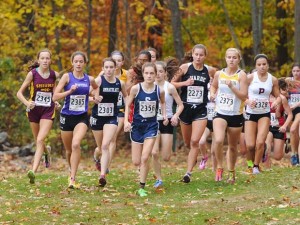 Many of the top runners from the Connecticut State Cross Country Open will take part in the 80th New England Championships. MaxPreps photo by Geoffrey Bolte

The 80th annual New England High School Cross Country Championships will be run this Saturday, November 8th at Wickham Park in Manchester, Connecticut.  The event is sponsored by the Council of New England Secondary School Principals’ Association (CNESSPA).  The Boys race will begin at 11:30 am and the Girls race will follow at 12:30 pm over a challenging 5,000 meter (3.1 mile) course through open fields and woods.  The races will feature the top six teams and the top 25 runners from each of the 5 participating New England states (Connecticut, Maine, New Hampshire, Rhode Island, and Vermont). The race will be streamed live on the NFHS Network.

The host state Connecticut has the favorites for both individual titles.  Hannah Debalsi of Staples (Westport) HS will be defending her 2013 title.  Debalsi won a year ago at Derryfield Park in Manchester, NH by 24 seconds. She is currently ranked #2 nationally and the only girl ranked from New England.  The junior holds the course record at Wickham Park of 17:41, which she ran at the CIAC Class LL Championship in 2013.  Alex Ostberg is the Boys favorite and was second last year at the New England Championship.  Last year’s champion, Trevor Hopper of Ridgefield (CT) HS has graduated.  Ostberg, a senior from Darien HS, won the CIAC State Open Championship last Friday with a winning time of 14:58, crushing the previous course record by 23 seconds.  Like Debalsi, the Stanford bound Ostberg is ranked #2 nationally and the only New England runner listed in top 25.

In the Boys team competition, the top three teams are again in the field, along with five other teams from the top ten in 2013.  La Salle Academy will be the favorite to defend their New England title after winning the Rhode Island Championship, defeating Bishop Hendricken, who finished third in 2013 at the New England.  State Champions, Danbury (CT), Pinkerton Academy (NH) and South Burlington (VT), along with Connecticut Runner-up Ridgefield should challenge for the three team trophies.