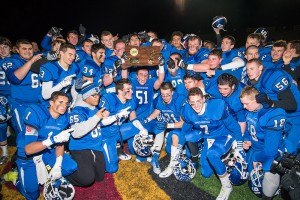 It was the second straight state title and third overall for top-seeded Southington (12-0), the top ranked team in both the New Haven Register media and The Day of New London coaches’ polls.

“We tackled phenomenally,” Southington coach Mike Drury said. “We swarm to the football, and we played physical, and that’s what we preach. The kids executed the game plan to perfection and went against two great runners (Khaleed Exum-Strong and Jawaun Johnson) and an enormous offensive line.”

Alex Jamele said, “We just love to fly to the ball and hit people.”

Jamele had seven catches for 126 yards and two touchdowns to set the state career touchdown reception record. He passed Newtown’s Julian Dunn and finished with 50.

“It feels good, but this victory is way better than that,” said Jamele said, who also scored on a 62-yard punt return.

Jasen Rose completed 24 of 31 passes for 348 yards and five touchdowns for the Blue Knights and Matthew Maxwell had eight catches for 127 yards and three scores.

Southington led 14-0 with over three minutes left in the first half when Maxwell made a spectacular catch for a 49-yard touchdown. 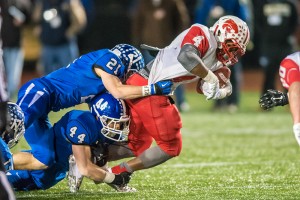 NFA was forced to punt on its next possession. The ball landed near Jamele, who thought for a second before picking it up and taking off. He took it for a 62-yard touchdown to push his team ahead, 27-0, with 1 minute, 28 seconds left in the half.

Drury said, “Some players have that little innate thing, they know what’s going on on the field. He saw the window; he saw the opportunity. … Watching as a coach, you’re going ‘no.’ then we’re saying ‘go’ in the very next breath.”