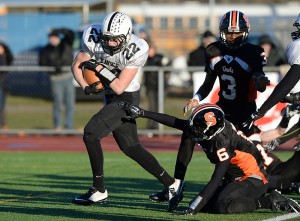 WEST HAVEN – Keeping the faith has been a mantra for the Xavier High football team all season.

Xavier’s chances of making the postseason didn’t look good after losing to Shelton to drop to 6-3 in November. But the Falcons’ prayers were answered when three teams lost on Thanksgiving to allow them to qualify.

And Xavier’s chances of winning Saturday’s Class LL-Small championship game certainly did not look good with 50 seconds left. Shelton had a first and goal at the 1-yard line, and had the ball in the capable hands of quarterback Mark Piccirillo looking to break a 21-21 tie.

“I had faith in our defense,” Xavier running back Glenn Cunningham. “I had a feeling something good was going to happen.”

Piccirillo, one of the state’s most prolific players with nearly 4,000 yards of passing and running yards combined this season, lunged toward the goal-line but fumbled the ball into the end zone where Xavier’s Eric Lee recovered in a play where some on the Xavier sideline were calling it “The Miracle on the Sound.”

Inches away from defeat, Xavier instead won the game in the first overtime, 28-27. Shelton scored on its first OT possession but missed the extra point. Xavier quarterback Mike Scherer ran in from 5-yard out to tie it a 27-27, and kicker Andrew Verre kicked the game-winning PAT.

The state title was Xavier’s fifth overall and fourth in the last five seasons. Unlike the crowns from 2010 to 2012, when the Falcons were undefeated and ranked No. 1 in the state poll, Xavier (9-3) came into this game as an underdog against the Gaels (12-1).

“For a lot of reasons, this one might be the sweetest,” Xavier coach Sean Marinan said. “Shelton was the best team all year and much better against us in the regular season. “But finally we’ve started to play up to our potential. My youngest son, Paul, is a senior, so he and my oldest son went out with a championship. It’s a great day for Xavier football.”

As triumphant as Xavier feels, Shelton felt crushed to see its perfect season slip out of its hands, literally, in its quest for its first title since 2004. Picirillo, who rushed for 141 yards and hit eight of 14 passes for 233 yards and three TDs, did not feel he fumbled.

“I believe my elbow was down so it should not have been a fumble,” Piccirillo said. “But there is no replay in high school. It sucks but it’s too bad it came down to that.”

Shelton never trailed in its 28-20 regular-season win over Xavier, but the Falcons came out quickly Saturday. Cunningham, who rushed for 162 yards on 2 carries, ran for 52 yards on Xavier’s second offensive play to set up his 9-yard TD run for a 7-0 lead. 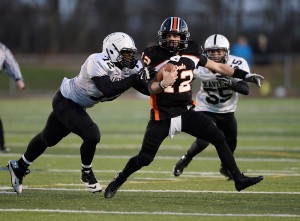 Shelton answered on Piccirillo’s 65-yard TD pass to Shane Corcoran but missed the PAT to make it 7-6.

On the first play of the second quarter, Cunningham scored from 1-yard out to put Xavier up, 14-6 – a lead that stood going into halftime.

Shelton tied it at 14-14 on Chris Kanios’ 74-yard punt return and Kanios’ conversion run early in the third quarter. Late in the third, Piccirillo passed 53 yards to Kevin Robinson. The PAT was good this time for a 21-14 Shelton lead.

In the first  round of OT, Shelton scored on Piccirillo’s 12-yard pass to Alex Kirk to make it 27-21. But Xavier’s Kalem Lutton blocked the kick.

Xavier answered with Scherer’s 5-yard TD run and Verre’s PAT to win it.