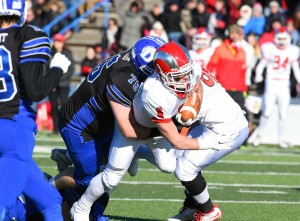 WEST HAVEN  – New Canaan High School’s football team capitalized on some Darien mistakes and survived several errors of its own, erased a 20-7 halftime deficit, and prevailed for a 21-20 victory in the Class L – Large division championship game at West Haven High on Dec. 13.

This marks the second year in a row the Rams have beaten their FCIAC rivals for state bragging rights. Seeing Darien dig out of a 21-0 hole to win a conference championship game between the familiar foes seemed to serve as motivation for the Rams once they fell behind in similar fashion in the state championship matchup.

New Canaan Coach Lou Marinelli said he told his players at halftime “it’s up to us to show what we can do – that we can come back.” His second-seeded Rams did just that, shocking the top-seeded Blue Wave in a game dominated by strong defenses, costly turnovers, and some clutch offensive plays.

Kyle Smith caught a 17-yard touchdown pass from quarterback Michael Collins to get the Rams to within 20-14 with 7:57 left in the third quarter on a clutch fourth down and nine yards to go conversion. New Canaan’s Michael Cognetta recovered a surprise onside kick but the Rams were forced to punt. New Canaan’s defense stopped the Blue Wave only to see a penalty for too many men on the field while the teams set up for a punt give the Wave a fresh set of downs. Matthew Cognetta intercepted a pass on the next play. Only moments later, Darien’s Tyler Grant picked off a pass to thwart New Canaan’s drive.

In the fourth quarter, after the Rams made a stop, Darien did the same only to see a penalty for too many men on the field during a punt setup give New Canaan new life this time around. The Rams cashed in and Collins connected with Alexander LaPolice for a 24-yard scoring strike with 6:59 to play. Kicker Peter Swindell’s extra point gave New Canaan its first lead since a first-quarter touchdown.

The Rams got on the board first when Collins connected with Michael Kraus from 15 yards out, with 8:41 to play in the opening quarter. The scoring play was set up by a Kraus fumble recovery at the 15.

Darien scored all three of its touchdowns in the second. Darien QB Timothy Graham hit William Hamernick for a 30-yard score on the first play of the quarter, only seven seconds in.

After the teams traded interceptions, Darien took advantage of a 15-yard personal foul penalty against the Rams and a 26-yard rush by Shelby Grant to set up Hudson Hammill’s 3-yard TD run to gave Darien the lead with 7:34 to play before halftime. Darien added to its advantage on Graham’s 11-yard pass to Griffin Ross with 2:05 left in the half. The scoring drive featured another 15-yard penalty and the Wave converting a fourth and inches and third and short play to move the ball. A bobbled snap on the extra point attempt proved costly as Hammill’s effort to get into the end zone for two points came up short, leaving the score 20-7.

Darien Coach Rob Trifone was disappointed his team made crucial mistakes, including a dropped ball on a late-game drive.

“You can’t come out in the second half and not score a single point against them,” Trifone said.

Neither team got much going on the ground as Darien netted 69 rushing yards and New Canaan had 41 rushing yards. In passing yards, New Canaan outgained Darien 259-161 as Collins completed 25 of 48 attempts and Graham completed 16 of 30. 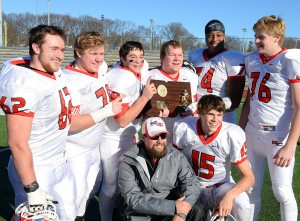 Christian Trifone led Darien with 10 tackles and teammate Mark Evanchcik had nine, and three and a half sacks. Charlie Travers also had nine tackles and Jack Griffiths had six. New Canaan’s Chris Keeffe had a dozen tackles, Teddy Dumbauld had nine to go along with a sack, and Michael Cognetta and Knox had eight and six tackles, respectively.

“I’m proud of the way our kids hung in there,” Marinelli said.