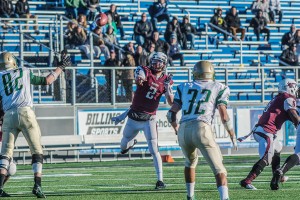 Windsor scored on an interception return and a fumble recovery, and forced three other turnovers, in a 38-16 victory over Notre Dame-West Haven in the Class L-Small state championship game Saturday at Arute Field.

It was the first state title for the top-seeded Warriors, who finished unbeaten at 12-0. Windsor had lost in the championship game in 2012 and 2002.

“We finally did it for the town of Windsor,” said Windsor junior Tyler Coyle, who returned a fumble 89 yards for a touchdown in the third quarter.

But the rally attempt was short-lived as Eric Vinson (69-yard interception return) and Coyle scored within a six-minute span later in the quarter to put the Warriors up 31-16. Hunter Burns appeared to have dropped a pass from Lupoli, but the referees ruled it a completion and a fumble.

“I was nervous at first,” Coyle said. “I knew the ball was on the ground, but I didn’t know if it was a fumble or not. I grabbed it with one hand, bobbled it around a little bit, but I had to stay with it. I saw daylight, and I just had to take it to the crib.”

Said Notre Dame coach Tom Marcucci: “That was a tough one. We were right down there on the 9-yard line. Those things hurt it. A little bit uncharacteristic. We really haven’t turned the ball over this year that much, and they brought them both back, which hurt us.”

Jordan Knight scored on a 65-yard run in the fourth quarter for Windsor. 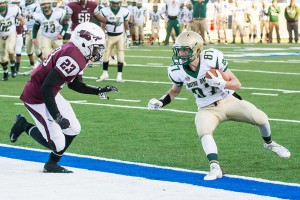 Notre Dame (9-4) was denied its fourth title. Lupoli threw a 6-yard touchdown to Burns to put Notre Dame on the board after trailing 19-0 in the second quarter. Lupoli finished completing 19 of 47 passes for 156 yards, two touchdowns and three interceptions. Ragaini caught seven passes for 83 yards.

John Nolan (9 of 15, 165 yards) threw two touchdown passes to Coyle and one to Courtney Rush in the first half for the Warriors. Coyle made five receptions for 64 yards.