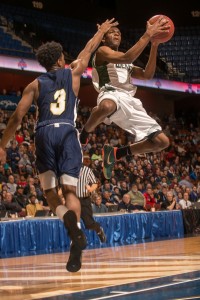 UNCASVILLE – Andre Lyons finished with 23 points and 11 rebounds to lead top-seeded Weaver to a 73-59 win over No. 6 seed Notre Dame-Fairfield in the Class M state championship game Saturday afternoon at the Mohegan Sun Arena.

“We had nerves. We had to fight through that for 2 ½-3 quarters and in the fourth quarter, finally, everybody started to play, and we were able to go on that big run,” Weaver coach Reggie Hatchett said. “Andre Lyons had the game of his life on the biggest day possible.”

KeAndre Fair added 13 points for Weaver, which lost the last two years in the championship final to Granby (in Class S) and East Catholic (M), respectively.

“In the first quarter, when I saw some of the nerves, even though it was in the back of my mind too, I had to fight against falling into the trap of, ‘This is not last year, we are a year stronger and a year better.’” 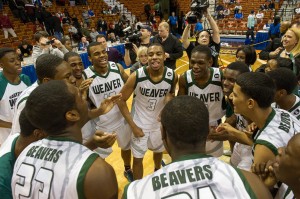 Jordan Pettway finished with 17 points, including 11 of 13 from the free-throw line, for Notre Dame (21-7), which  was 5-5 at one point this season before winning 16 of its last 17 games before heading into Saturday’s final.

“For me to be really, really upset is very, very difficult because I’m very, very excited about how our guys did because they battle the whole time,” Notre Dame coach Vin Laczkoski said. “When you are as athletic as they are and as good as they are, the dam kind of busted a little bit.”

The boys Class M final was the final game in the opening three-game session of the CIAC boys and girls basketball finals at Mohegan Sun, which drew a paid attendance of 4,956 over the three games.