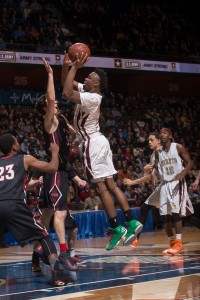 Uncasville — Sacred Heart didn’t have any jitters in this year’s championship rematch with Valley Regional.

The Hearts raced past the Warriors early and won their second straight CIAC Class S championship, 71-46, before 9,059 at Mohegan Sun Arena.

“We knew we were the better team going in to it, so we just played like it,” Sacred Heart’s Mustapha Heron said.

Malik Petteway had 22 points and 18 rebounds for the top-ranked Hearts (28-0), which will go wire-to-wire as the top-ranked team in the New Haven Register Top 10 poll.

“Beating a team like us in the fashion they did showed how good they are,” Warriors coach Kevin Woods said. 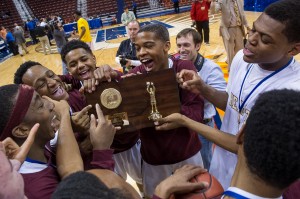 Sacred Heart beat the Warriors in last year’s Class S final, but it was a struggle. It went on a 10-0 run in the final three minutes to win, 65-56.

That wasn’t the case this year. The Hearts raced to an 18-4 lead late in the first period and never led by less than double digits.

“We were commenting amongst the staff about the difference in the tone, the feel, of the locker room,” Hearts coach Jon Carroll said. “Last year, you could feel the tension. They were nervous. This year, they were very business-like. They may have been a little more aloof than I would’ve liked, but, again, it was a thing where they understood that there was a job to do.”

“I got a special group of seniors,” Woods said. “They won a championship (2013 Class M title) and been involved in two. (They) won two Shoreline (Conference) championships. It’s not the result you want, but it’s an unbelievable way for them to finish their careers. I’m very proud of them.”

Heron’s jumper gave his team their largest lead of the game, 67-43, with 2 minutes, 17 seconds remaining.​