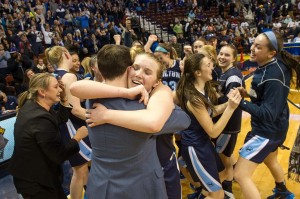 UNCASVILLE – So much for first-time jitters on a championship stage.

Playing in its first CIAC basketball final in school history, second-seeded Wilton dominated from start to finish, polishing off top-seeded South Windsor, 73-45, to win the Class LL girls’ title Saturday before a crowd of 5,000 at Mohegan Sun Arena.

The game was going to determine a first-time CIAC champion. South Windsor, 0-3 in three previous trips, had recent experience in losing the LL final a year ago. That resume dwarfed Wilton’s.

But the Warriors (24-1) played like they belonged, ,jumping to an 8-0 lead after 90 seconds and staying in front with sizable margins throughout, leading 26-15 after one quarter, 45-25 at halftime and 61-34 after three quarters.

Wilton has a slew of state championship in field hockey, soccer and cross country. Now the Warriors, who lost in their FCIAC tourney semifinal, has one in basketball. 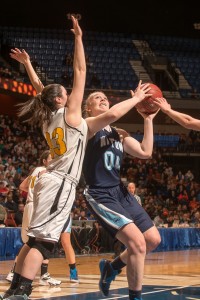 “I’m proud of the girls,” Wilton coach Jaclyn Porco said. “It took all five starters to buy into the system from day one and this is the result. Our number one theme today was to get out on top. I thought it was going to be a back-and-forth game, but we fed off our early energy.”

South Windsor (24-1) could not recover from getting into an early rut. Usually a strong shooting squad, the Bobcats hit just one of 15 from 3-point range and shot 29 percent (17 of 59) overall. Wilton also used its size to control rebounding to the tune of a 55-24 edge.

“Right off the bat, we’re down 3-0 after ten seconds,” he said. “Confidence coming out of the game is huge in a game like this. Wilton got a lot of confidence early and was hard to stop.”

The Warriors were sharp from the opening tip, jumping to an 8-0 lead on Makenna Pearsall’s three-point play. The lead grew to 19-7 with three minutes left in the quarter on the third of Cunningham’s 3-point baskets.

Wilton was dominating early without Meyer, the 6-foot-3 Providence-bound center, making her inside shots. Once Meyer pulled it together, completing a pair of three-point plays, passing for baskets (5 first-half assists) and blocking shots, the Warriors pulled away for leads of 26-15 after one quarter and by as much as 44-23 late in the second before settling for a 45-25 halftime edge.

“Give Cunningham credit,” Leclerc said. “Those threes opened things up inside.”

Cunningham had 21 at the half on 8 of 11 shooting, including four of five from behind the line. Wilton shot 17 of 33 and held a 31-15 rebounding edge at halftime against the cold-shooting Bobcats (9 of 32 from the field.)

South Windsor finally made its first 3-pointer with 1:42 left in the third when leading scorer Amy McConnell (12 points) connected, but that only cut the gap to 57-32. The Bobcats made only four of 18 shots in the third.

Wilton’s relentless rebounding and ability to handle South Windsor’s press prevented any comeback. The lead swelled to 71-44 when Meyer fouled out with 2:34 left, rendering her exit a moot point.

In a game with no lead changes, the outcome was virtually sealed in the first five minutes.

“Coach preaches coming out with a bang,” Meyer said. “It’s a great way to fight off nerves by getting an early lead. We kept that early confidence for the whole game.”