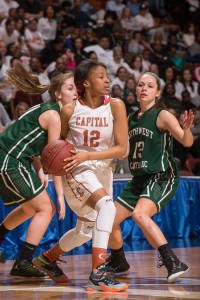 Gillespie has been dong that her entire career at Capital Prep.

Gillespie, a Maryland-bound senior, had a game-high 42 points and 22 rebounds with three assists and three blocks as the Trailblazers blitzed Northwest Catholic, 87-59, and won their third straight state title.

“This might have been the best time,” Gillespie said about winning No. 3. “It’s a different feeling every time. You think you get used to it, but not at all.  Winning is great.”

Desiree Elmore had 30 points, 17 rebounds, eight assists, five blocks and five steals for Prep (25-1), seeded fourth in the division, but number one in the state. Gillespie helped Trailblazers’ head coach Tammy Millsaps transform Prep from a small-school magnet program to a nationally ranked powerhouse. The Trailblazers made the state final in all four years with Gillespie and senior Dazha Ward.

“She’s done a lot for this program,” Millsaps said. “She put Capital Prep on the map. … When I first got her, she wasn’t the most pleasant kid to coach, and she’s come a long way. It just goes to show you that if you can really tune in to someone who has your best interests (at heart) and knows what it takes to get to that next level, then you can just ride on their back and do some great things down the road.” 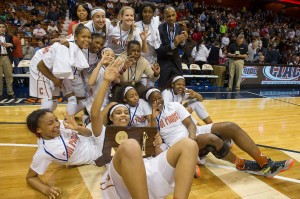 Gillespie said, “It’s not just myself. A lot of it has to do with my teammates and being a really good team.”

Haley Connors and Erin Feeney both scored 12 for the 11th-seeded Indians (19-7). Elysia Calloway and Lauren Murphy each scored 10, too.

“I don’t doubt our team’s toughness for a second,” Northwest coach Sean O’Brien said. “There are three seniors here, but for the rest of them, can you learn a better lesson? I don’t know that you can. You’re playing the best team in the state in probably about 20 years, and you get a chance to experience what this level is.

“So outside of a win, I think it’s probably the best thing you can ask for.”

The game was never in doubt as Prep scored the first 11 points. It took the Indians almost four minutes to score. The Trailblazers led by as much as 35 points (70-35) with 40 seconds let in the third quarter.

When it was over, the usually stoic Millsaps was moved to tears.

“This is my last year with some of the kids that came in with me,” Millsaps said. “We came in together. Four years together.”

Gillespie said, “She’s a really a softy. … Those are tears of joy. It’s been a great four years. I think she’s proud of me. Finally”