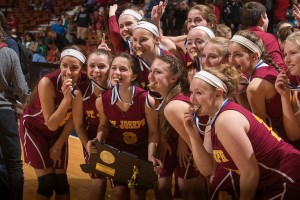 UNCASVILLE — Chris Lindwall seems to be pretty prophetic when it comes to identifying a potential championship team.

Lindwall told the freshman team four years ago that they could win a state title if the put in the work.

Good call. Senior co-captain Bridget Sharnick had 16 points, eight rebounds and five steals to lead the 11th-seeded Cadets past No. 4 Cromwell on Saturday, 50-44, to win the CIAC Class M title. 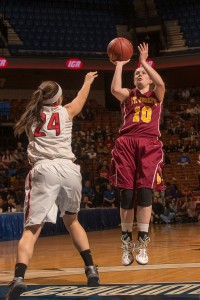 “They were undefeated (as a freshman team),” Lindwall said of his seniors. “At the end of the year, we had those kids in the locker room. … and we said to them, right then and there, ‘this team can win a state championship if you make the commitment,’ and those kids made the commitment.

“How many teams have nine seniors (on a 14-player roster)? Not many.”

Junior Jacqueline Jozefick made all eight of her free throws and had 10 points and 11 rebounds for the Cadets. Senior Caitlin Sharnick added eight points and eight rebounds

“Everyone said to me, ‘why are you keeping nine seniors?,’” Lindwall said. “That’s why. That’s why. … This was an unbelievable team win.”

“Usually, we score an average of 60 points,” Cromwell coach Kelly Maher said. “St Joseph just played some good defense and pushed us a little further (from the basket), and we had some off-angle shots.”

The Cadets threatened to blow Cromwell out in the first half as it shot 50-percent, including five 3-pointers.

St. Joseph made three successive 3-pointers late in the second quarter. Senior Shannon O’Meara started and ended the run with classmate Juliana Farmer adding one of her own. It gave the Cadets a 27-14 lead with 2 minutes, 8 seconds left in the half.

“Nothing like it was the last game,” Sharnick smiled, referencing the 15 3-pointers St. Joseph made in its 61-39 semifinal win over Enfield (March 16).

The Panthers flipped the script in the third quarter as it outscored St. Joseph, 12-3.

Belcourt’s 3-pointer late in the period cut the Cadets’ lead to 34-28.

“I’m proud of my kids,” Maher said. “They could’ve folded. They fought hard. They made it a game.”

Lindwall said, “(My team) were trying to survive, and I said to them, ‘just play our game. Do what we’re doing.’”