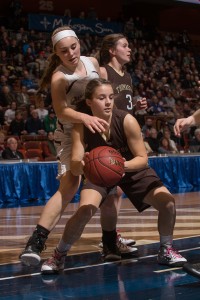 Gabrielle Hurlburt missed two free throws with 8.6 seconds left for Thomaston (21-3), but she was able to steal a pass in the final seconds to give the Golden Bears their second straight Class S title.

“She hustled back, read the eyes (of the passer) and picked it off. She won the game with that play,” Thomaston coach Robert McMahon said. 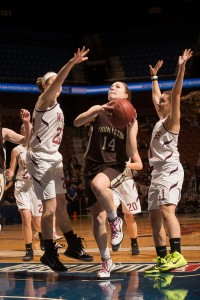 “We had two opportunities with two of my best kids with the ball,” Canton coach Brian Medeiros said. “We didn’t get the result we wanted, but if you asked me yesterday if we had a chance with the ball down two with 20 seconds to go, I’d say. ‘I’d sign up for that. It just didn’t happen to work in our favor.”

Casey Carangelo finished with a game-high 15 rebounds for Thomaston.

Thomaston becomes the first team to repeat as Class S girls champs since Kolbe Cathedral turned the trick in 2004-05. The Bears earned the repeat title despite shooting just 14-of-26 from the free throw line and committing 29 turnovers.